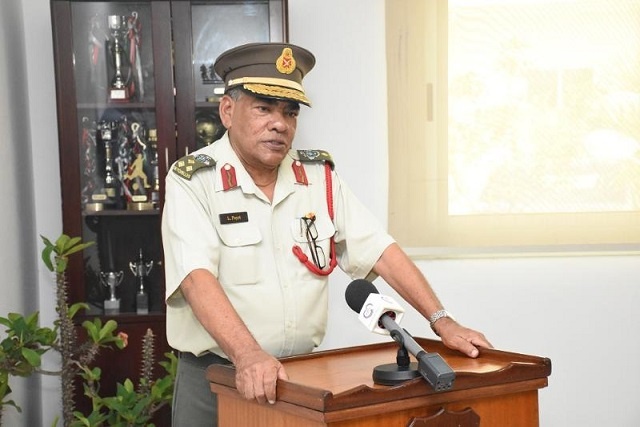 Brigadier Payet speaking at the Presidential visit to the Seychelles Coast Guard on Saturday. (Thomas Meriton)

Payet’s retirement will take effect on January 1 after 41 years of service to the island nation in the western Indian Ocean.

The Seychelles’ President said he will announce a new Chief of Defence Forces in December.

Speaking to officers present on Saturday morning at the Seychelles Coast Guard located at Ile Perseverance, a reclaimed island, Faure thanked the Brigadier for his 41 years of service to Seychelles People’s Defence Forces (SPDF), the country, and the people.

“I believe that it is truly a great honour to have a child of Seychelles who has given 41 years of service to the SPDF and service to their country,” said Faure.

“We must realise that before us, there were others, who worked hard for everything we have today and everything we are today. We owe them our respect. We cannot forget what they have done for us -- true servants -- that wear the SPDF uniform with pride,” added the President.

Faure said he hopes that “we are able to preserve Brigadier Payet’s fundamental values in SPDF, his discipline, commitment, and selfless service for his country.”