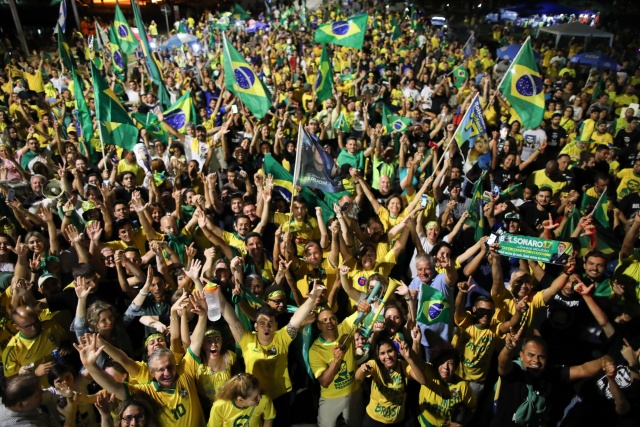 Supporters of far-right presidential candidate Jair Bolsonaro, celebrate in front of the National Congress in Brasilia, after the former army captain won Brazil's presidential election, according to official results that gave him 55.7 percent of the vote, on October 28, 2018. Far-right former army captain Jair Bolsonaro was elected president of Brazil on Sunday, beating leftist opponent Fernando Haddad in a runoff election after a bitter and polarized campaign. Official results gave the controversial president-elect 55.18 percent of the vote with more than 99.7 percent of the ballots counted. (Sergio LIMA / AFP)

And from January 1, he will be Brazil's new president.

Bolsonaro, 63, has built an image as a political outsider ready to rough up the establishment -- no small feat given that, unlike the US president, he is a longtime politician.

The seven-term congressman has few legislative initiatives to his record but, crucially, has not been caught up in the massive corruption scandals that have made Brazilians furious with the political class in recent years.

However, he has made enemies with his denigrating comments on women, gays and blacks, while fondly recalling Brazil's brutal 1964-85 military dictatorship, in which he served as an army captain.

"The dictatorship's mistake," he said two years ago, "was to torture and not kill" leftist dissidents and suspected sympathizers.

But Bolsonaro promised that he would govern "with authority, but not authoritarianism."

Running against leftist Fernando Haddad in Sunday's vote, Bolsonaro promised to relax gun-control laws so that "good people" can take justice into their own hands, in a country fed up with violent crime.

In an ironic twist of fate, he was himself stabbed in the stomach at a campaign rally in September, by an attacker who said God had sent him to kill Bolsonaro.

Despite spending three weeks in hospital, he didn't let his injuries keep him off his beloved social media accounts, where he kept up his virulent campaign.

He survived the attack without long-term damage, but, citing doctors' orders, subsequently refrained from campaign rallies and -- to Haddad's chagrin -- debates.

Bolsonaro calls himself an admirer of Donald Trump, and has similarly tapped a deep national malaise -- in Brazil's case, one caused by crime, an ailing economy and the never-ending "Car Wash" corruption scandal that has stoked fury at the political class.

"He talks about 'politicians' as if he weren't part of that world. He wants to come across as a strongman, a hardliner, who will fight corruption," said Michael Mohallem, a law professor at the Getulio Vargas Foundation.

He owes his business support mainly to his choice of top financial adviser: respected liberal economist Paulo Guedes, a graduate of the University of Chicago.

He earned the farming lobby's backing with vows to put agriculture before the environment -- frightening environmentalists, who warn he would be disastrous for the Amazon rainforest.

Evangelicals meanwhile like his social conservatism -- although some frown at the fact that Bolsonaro, a Catholic, has five children by three women.

Born in 1955 to a Catholic family with Italian roots, Bolsonaro served as a paratrooper in the military before starting his political career in 1988 as a Rio de Janeiro city councilor.

Two years later, he was elected to the lower house of Congress, where he has been since.

He has ignited one explosive controversy after another with his misogynist and racist remarks.

In 2003, he said a female lawmaker he opposed was "not worth raping."

In 2011, he told Playboy magazine he would rather his sons be killed in an accident than come out as gay.

In 2016, he dedicated his vote to impeach leftist former president Dilma Rousseff to the military officer who headed the torture unit where she was detained as a political prisoner during the dictatorship.

With piercing blue eyes, Bolsonaro was known for his physical strength in his army days -- earning the nickname "Big Horse."

Today, his most fervent supporters have given him another nickname, the "Myth" -- an image only bolstered when he survived the stabbing attack last month.

Bolsonaro has four sons -- three of them politicians -- and, in what he called a moment of "weakness," a daughter.