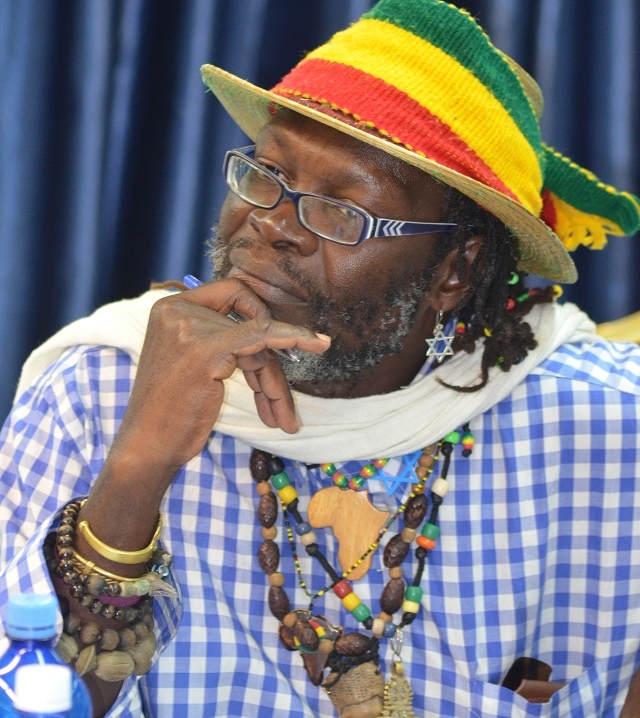 Kwame was one of the brightest and most colourful persons of the main island of Mahe. (Sharon Ernesta, Seychelles News Agency)

(Seychelles News Agency) - The rainbow nation of Seychelles is mourning the loss of one of its most colourful sons.

Achille Kwame Luc -- a well-known artist, a promoter of the islands' rich culture and heritage, an environmentalist, an ardent supporter of human rights, and a peace lover -- was laid to rest on Monday.

A personal friend of the writer of this article, Kwame, 55, can be described as one of the brightest and most colourful persons of the main island of Mahe. The capital city – Victoria – will be duller now without him in sight.

The fact is Kwame always attracted attention wherever he went because of his unique style. A musician who was proud of his African roots, Kwame stood out – tall, in a locally made straw hat, red, yellow and green beads adorned to his dreadlocks.

Around his neck were jewelries locally made from colourful beads, coconut shells and seashells. But one’s attention would be drawn to a big pendant in the shape of the African continent carved from wood.

Completing his attire were a red, yellow and green shawl and a locally made bag from a fibre called ‘vakwa’ as Kwame was one of a handful of Seychellois still using the sak vakwa.

Hailing from the southwest district of Baie Lazare, Kwame started his career in the education sector as a lab technician but it was his artistic skills which made him popular.

His career began when along with his three brothers, Kwame performed in the band “Luc 4”. In 1987, he joined with veteran musician Patrick Victor whose music was a fusion of different African beats to form a local group called Bwa Gayak.

Keven Valentin was also a member of Bwa Gayak. “It was with Bwa Gayak that we experienced our first international tour where we played in France. And it was during these promotional tours which I discovered Kwame as a valuable asset to our band, but what stays with me was his discipline and modesty.”

Kwame and Valentin then went on to form the band Sokwe enjoying success nationally and internationally before parting ways. Over the years Kwame played in various bands but it was with the Kazoo band, which Kwame performed with for the longest time –for over ten years.

“Together we provided entertainment in almost all hotels on Mahe and even at sunset cruises,” recalled Jose Charles founder of Kazoo, who lives in the same district of Baie Lazare.

Charles who is also a caterer would often call on Kwame to help him especially when he had orders for locally made juices.

“Achille was good at making these. I remember once we spent almost a whole night making fresh juices. These are memories which I will cherish,” said Charles

Apart from sharing the love for music both enjoyed nature. “Achille will always be my adviser when I had a gardening or landscaping project. He will always assist with the implementation as well.”

A naturalist and an avid protector of the islands pristine and fragile environment, Kwame was actively involved in the wildlife clubs. A club created in all schools to inculcate in the younger generation the love for the environment and to engage in conservation efforts.

“What was special with Achille was his way with kids, how he adapted and how spontaneous he was. I remember how after field trips he would collect seeds, which he assembled with other materials such as pet bottles. He would then get the kids to create music using these new instruments,” recalled Christelle Jacques a fellow Wildlife Club leader.

Co-founder of the Africa Friendship Association Kwame lived and breathed his African heritage. “Africa is rich and diverse in the fields of tradition, history, resources and knowledge,” the late Kwame once said adding that too often the emphasis is put on the negatives of Africa.

The association held several exhibitions on great African personalities and Seychellois with African diaspora which led to - “FetAfrik” – an annual event held in May showcasing African culture and tradition.

A promoter of peace, Kwame was one of the few Seychellois who had the opportunity to participate in exchange programmes with other nationalities on board the ‘Peace Boat’.

In 2011, Kwame was key in the organisation of the first Daniel Pearl Music Days in Seychelles - a group of 115 islands in the western Indian Ocean. Pearl was an American journalist working with the Wall Street Journal who was kidnapped and killed by terrorists in Pakistan.

Kwame was a defender of human rights and spoke openly against abuse, discrimination and xenophobia. He was active in civil societies and has contributed greatly to the development of this sector.

Kwame’s longtime collaborator on the music scene Jose Charles said that Kwame ‘has died with regret as he had so many aspirations for the development of culture but could not realize such due to lack of support from the authority.” Charles is calling on those concerned to valorize Seychellois artists when they are alive instead of waiting when they had passed on.

Kwame is survived by a daughter Rebecca, his mother Vitaline as well as brothers and sisters.