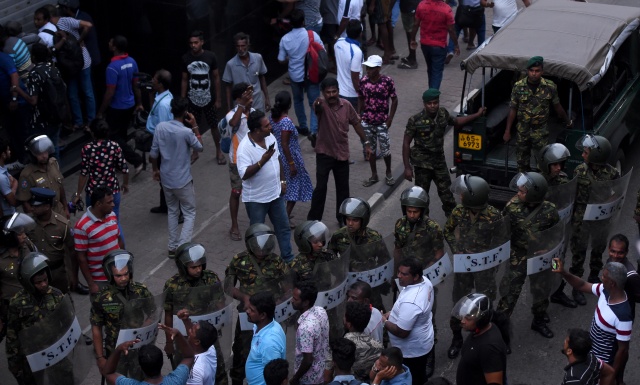 Sri Lankan soldiers keep watch outside the ceylon petroleum corporation in Colombo on October 28, 2018. A constitutional crisis gripping Sri Lanka since the president's shock dismissal of Prime Minister Ranil Wickremesinghe erupted into violence on October 28, with a man shot dead and two others injured in Colombo. (ISHARA S. KODIKARA / AFP)

(AFP) - Pressure mounted on Sri Lanka President Maithripala Sirisena to reconvene parliament Monday after his shock dismissal of the prime minister and suspension of the assembly triggered a power struggle and clashes that claimed one life.

The US State Department on Sunday urged Sirisena to "immediately reconvene parliament" to allow legislators to quell the constitutional crisis sparked by his sacking on Friday of prime minister Ranil Wickremesinghe.

Wickremesinghe and his party are expected to ask the courts to have Sirisena’s action declared illegal, while neighbour and regional power India is pressuring Sirisena to restore parliament, diplomatic sources told AFP.

Wickremesinghe has refused to vacate the prime minister's official residence, barricading himself inside as over 1,000 supporters, including chanting Buddhist monks, rallied outside.

The 69-year-old says his sacking is illegal, and wants an emergency session of parliament held to prove he still commands a majority.

He received a boost Sunday when Parliamentary Speaker Karu Jayasuriya refused to recognise his dismissal and asked the president to restore his privileges and security detail until another candidate could prove a majority in parliament.

Tensions remained high across the capital Colombo, with police leave cancelled and several legislators loyal to Wickremesinghe warning of street violence if the president did not immediately summon parliament.

Police said one man was killed and two were injured Sunday when bodyguards for Petroleum Minister Arjuna Ranatunga, a Wickremesinghe loyalist, fired at a mob that attempted to take him hostage.

"I hereby call upon yourself to uphold the rule of law by summoning parliament... to perform its legitimate functions," said Sampanthan, who represents Sri Lanka's minority Tamil community.

In a statement late Sunday, Rajapakse said his priority is to hold local council elections and also have a general election "as soon as possible." Parliamentary elections are not due until August 2020.

He said he wanted to "give the people the opportunity to vote for a program that will bring the country out of the all-encompassing economic, political and social crisis that it is now in."

Rajapakse's aides said he was due to formally begin work on Monday and name a cabinet later in the afternoon.