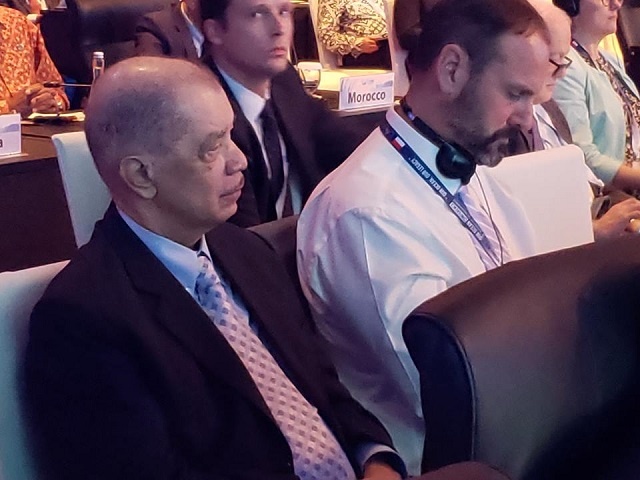 Michel was appointed a founding member of the Pew Bertarelli Ocean Ambassadors at the 'Our Ocean' conference in Indonesia. (James Michel Foundation, Facebook)

(Seychelles News Agency) - A former president of Seychelles, James Michel, was appointed as a founding member of the Pew Bertarelli Ocean Ambassadors on Monday.

Michel’s appointment was announced on the sidelines of the ‘Our Ocean Conference' in Bali, Indonesia, according to a communiqué from the James Michel Foundation.

Michel said he is encouraged by the recognition of the role he has and continues to play globally towards the protection of our ocean.

“I have devoted much of my life to marshal a new era of sustainability and prosperity for our oceans by championing causes such as the Blue Economy and marine protected areas. The Blue Economy is not simply about making greater use of the sea, or more commercial fishing, but about making better use of it. In this economy, the sustainability of ocean resources is recognised as critical to global economic growth," he said.

The co-president of the Bertarelli Legacy, Dona Bertarelli, said, “The ambassadors are committed to promoting marine conservation, especially large-scale Marine Protected Areas and are global leaders who have demonstrated their commitment to protecting the ocean.”

Michel, who is the executive chairman of the James Michel Foundation, is recognised as one of the pioneers of the Blue Economy. In 2015, during his presidency, he established a Blue Economy Research Institute in association with the University of Seychelles. Soon after, the Seychelles’ government embarked on plans for a roadmap for the Blue Economy, with support from the Commonwealth Secretariat.

His appointment came on the same day that the Seychelles, a group of 115 islands in the western Indian Ocean, launched its sovereign blue bond to raise private investment to finance a transition to sustainable activities and practices by the domestic fishery.

The bond, the first of its kind, was initiated during Michel’s administration in January 2016 to address the challenges and risks to the Seychelles' marine and coastal resources.