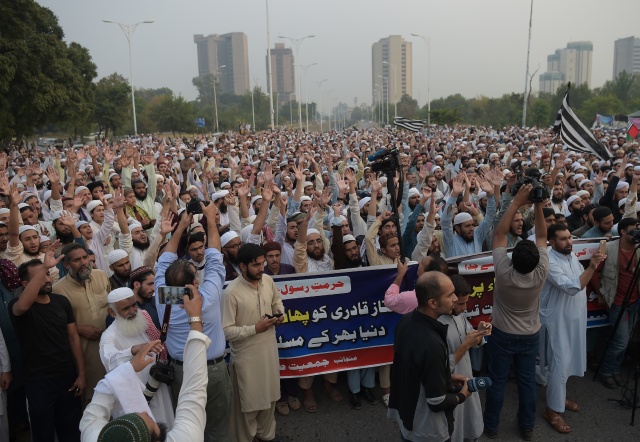 Pakistani supporters of the Jamiat Ulema-e-Islam-Fazl (JUI-F), a hardline religious political party, chant slogans during a protest against the Pakistan's Supreme Court decision on Christian woman Asia Bibi, in Islamabad on October 31, 2018. Pakistan's Supreme Court on October 31 overturned the conviction of Asia Bibi, a Christian mother facing execution for blasphemy, in a landmark case which has incited deadly violence and reached as far as the Vatican.
AAMIR QURESHI / AFP

(AFP) - Pakistan's beleaguered Christian community rejoiced Wednesday at the acquittal of Asia Bibi, who spent years on death row for blasphemy, saying their prayers had been answered after years of begging for justice.
Christians make up around two percent of the country's 210 million population and have long been discriminated against in Muslim majority Pakistan, often living in downtrodden slums and forced to work menial jobs.
Wednesday's acquittal of the illiterate mother represented a rare victory for the community -- with Christians in Pakistan's capital Islamabad hailing the Supreme Court's decision.
"Justice has been done," said Reverend Javed Masih, who heads a Presbyterian church in a Christian slum in the capital.
"We are happy that the law is still ruling in this country and that's why Asia Bibi has been set free," added another Christian resident Shafaqat Masih.
A few hours after the announcement of the verdict, life continued as usual in one of Islamabad's impoverished "Christian colonies" -- sandwiched in between the capital's wealthiest neighbourhoods where many of the residents work as cleaners and cooks.
"We are extremely happy that God has responded to our prayers. The church of Pakistan was praying for years for the release of our sister,"  Reverend Masih added, saying a special worship service was being held this evening to celebrate Bibi’s imminent release.

The allegations against Bibi date back to 2009, when she was working in a field and was asked to fetch water.
A row later erupted after two fellow Muslim labourers refused to share the water with Bibi, citing religious differences. The argument escalated as insults were traded with the women later accusing Bibi of committing blasphemy during the exchange.
Bibi was later convicted and sentenced to death in 2010.
"She was innocent and she was being discriminated [against]," said the pastor.
Christians like Bibi are frequently targeted by accusations of blasphemy -- a dangerous charge where even a mere whiff on an allegation has sparked lynchings.
Critics of Pakistan's controversial blasphemy laws have long claimed that the legislation has been used to settle personal vendettas and target religious minorities.
Bibi was set for immediate release following the ruling, however, authorities had yet to confirm if any security arrangements were being prepared for her protection or if she was planning to leave Pakistan.
Pakistani human rights activist Tahira Abdullah called for "state protection" of the acquitted along with her family and attorney.
As thousands of protesters took to the streets in major cities across the country to demonstrate against the ruling Pastor Masih acknowledged unrest could be triggered by the court's decision.
But he said his community would "pray for peace in this country".
Shahbaz Ashiq, another resident in the neighborhood, said he was "very proud of our Supreme Court and the decision".
"If she had not been acquitted, then we would have thought that there is no justice in this country," added Shafaqat Masih.
"Thank God that the court has acquitted her."
© Agence France-Presse

General » Be a reporter: Write and send your article » Subscribe for news alert
Tags: Pakistan, Christians