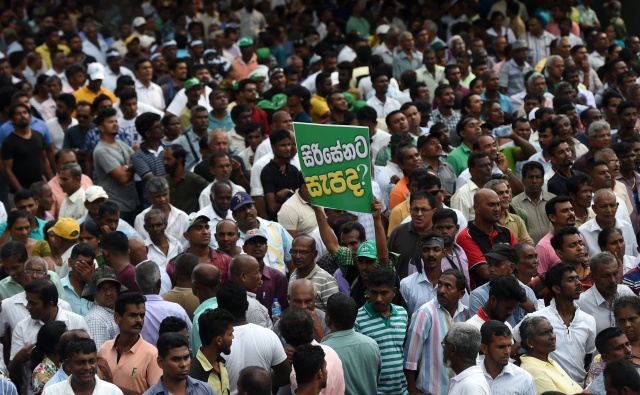 (AFP) - Rival Asian giants India and China are anxiously watching the constitutional conflict between contending prime ministers in Sri Lanka to see whose interests get the upper hand in their own strategic battle.

It is the second time in barely a month that the Indian Ocean has become a battleground between the powers, after the Maldives' hotly disputed presidential election saw the eviction of a pro-Chinese leader.

Both may be minnows compared to the two giant neighbours that loom over it to the north.

But they sit on the key sea trade and oil routes from Asia to the Middle East and Europe making them vital strategic interests for the rival powers.

New Delhi and Beijing insist that they are watching from outside the political ring as Sri Lanka's ousted prime minister Ranil Wickremesinghe slugs it out with Mahinda Rajapakse, the island's former authoritarian leader named to take over by the president.

But the stakes are high.

"With parliament suspended and all the political trickery between the two sides, the growing tensions are a worry for India and China," said an Asian diplomat in Colombo.

China was quick to deny an accusation by a lawmaker from Wickremesinghe's party this week that it was paying for Rajapakse's attempts to win over rival deputies.

"Groundless and irresponsible," said a frosty Chinese embassy statement in response to the allegations.

The constitutional crisis pits two very different characters against each other.

Rajapakse is a seasoned political bruiser, deeply charismatic but tainted by an authoritarian decade in power that culminated in a ruthless military campaign against Tamil Tiger rebels which ended a decades long civil war but killed some 40,000 civilians and saw widespread atrocities.

He was also much closer to Beijing -- billions of dollars of Chinese investment flowed into Sri Lankan infrastructure during his administration ranging from roads and ports to land reclamation in Colombo.

Maithripala Sirisena, the final key character in Sri Lanka's current political crisis trinity, vowed to change all that when he beat Rajapakse in a 2015 presidential election and put Wickremesinghe in charge of the government.

That should have encouraged India, which is desperate to stop China expanding its economic and military footprint in the Indian Ocean and other backyard states such as Bangladesh, Bhutan and Nepal.

But Wickremesinghe found the battle against Sri Lanka's huge foreign debt too much.

Last year his government gave a 99-year lease on the Hambantota deep-sea port to China because it was unable to repay Beijing's loans for the $1.4-billion project.

It was forced to deny US claims that China could set up a military base at the port.

India -- a modest investor in power and railway projects in the north of the country -- is meanwhile in talks to run Hambantota airport, another white-elephant project built with Chinese loans under Rajapakse.

The airport and port deals have not been good for China's image.

Both projects have been held up by critics as an example of how China's global largesse often comes with onerous repayment strings attached.

Delhi has turned on the charm with its own deals while in 2015 Narendra Modi became the first Indian premier to do a standalone visit to the island in 28 years, with a second visit two years later.

Many analysts see Sri Lanka riding a tightrope between India and China no matter who wins the power struggle in Colombo.

"They have been pulled into a perverse relationship with the Asian giants that none of the political parties can rectify easily," Samir Saran, president of the Observer Research Foundation think-tank in New Delhi, told AFP.

"Rajapakse definitely favoured Chinese investment and there was a move away from it after he left, but it still wasn't a complete break from China. It was more a move towards neutrality," added Madhu Bhalla, a former East Asian department head at the Delhi University.

"In its struggle with China for influence in Sri Lanka, the Indian government will not be pleased if Mahinda Rajapakse establishes himself in power," said Alan Keenan, a Sri Lanka specialist for the International Crisis Group.

"But already before the latest crisis, India and Rajapakse had been mending fences, as Rajapakse and his new party appeared increasingly likely to return to power (through elections) by late 2019 or early 2020."

Guo Xuetang, director of the South Asian and Indian Ocean Research Center at Shanghai University, said "small countries" like Sri Lanka and the Maldives do not want to be anyone's client state anyway.

"They do not want to be controlled by China, nor by India," he added. Whether Sri Lanka chooses India or China in the future will be a "balance of interests," said the specialist.