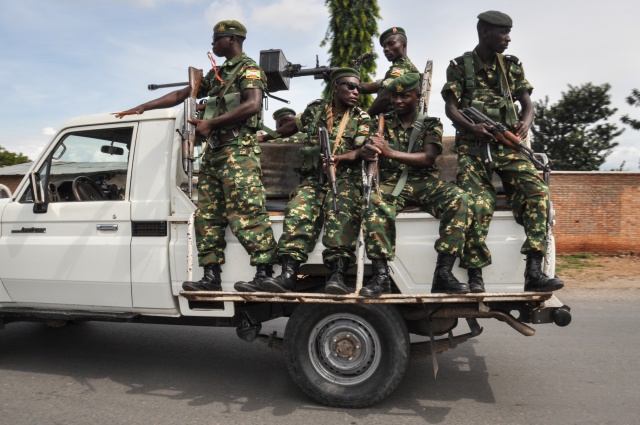 Burundi's security guards patrol near a polling station for the referendum on a controversial constitutional reform in Bujumbra, Burundi, on May 17, 2018. The constitutional amendment would allow the incumbent President Pierre Nkurunziza, a 54-year-old former rebel leader who has ruled since 2005, to remain for another 16 years in power. (STR / AFP)

(AFP) - The presidents of Burundi and Somalia on Tuesday called for an urgent summit to discuss the contested withdrawal of 1,000 Burundian troops from Somalia before the end of the month.

The African Union is gradually scaling back its Amisom force in troubled Somalia, and announced late last year that the Burundian soldiers must leave by the end of February.

Burundi has strongly opposed the drawdown of its troops, a valuable source of foreign currency in the country, which has seen donor funding cut since a political crisis broke out in 2015.

"We agreed to call an urgent summit of Amisom troop contributing countries to review this decision," Burundi President Pierre Nkurunziza said after an official visit by his Somali counterpart Mohamed Abdullahi Mohamed.

A source at the AU, speaking on condition of anonymity, said the names of the soldiers to be sent back to Burundi had already been decided and would leave between February 21 and 26.

Burundi's Foreign Minister Ezechiel Nibigira recently returned from Egypt where he secured the support of President Abdel Fattah al-Sisi, who earlier this month took over the rotating presidency of the AU, a high-ranking source at the ministry told AFP.

Somalia's president meanwhile praised the sacrifice of Burundi's soldiers who were "among the first" deployed to Somalia.

The AU has a 21,500-strong force, Amisom, to support Somalia's fragile internationally-backed government and fight Shabaab jihadists blamed for scores of bloody attacks.

The force is to be gradually scaled back as Somalia's embryonic armed forces are trained up and deployed to replace them.

Burundi has the second-largest contingent in Amisom with 5,400 troops, after Uganda, which has 6,200 men. Other contributors are Djibouti, Ethiopia and Kenya.

Participation in Amisom is a valuable source of hard currency, and the scaleback is likely to have a big impact on Burundi -- every quarter, the AU pays it around $18 million (15.7 million euros).