Kenya, Somalia to 'work towards peace' in sea border spat 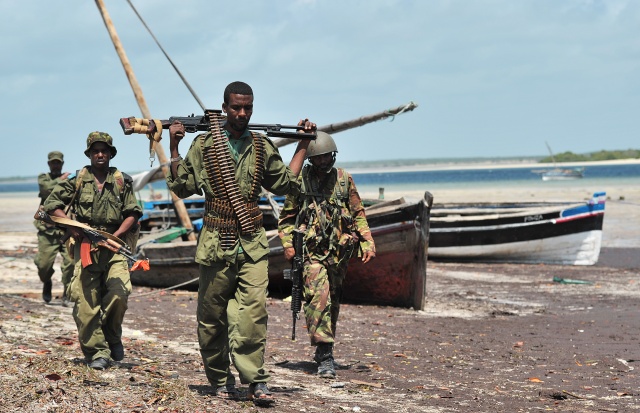 Militia allied with the Federal Government of Somalia and Kenyan Defence Force soldiers walk along the coast near Burgabo village, Southern Somalia on December 14, 2011. Burgabo is a Somalian port village which has been secured by Kenyan forces as they advance further up the Somali coastline in search of Al-Shabaab fighters. (AFP PHOTO/Carl de Souza)

(AFP) - Kenya and Somalia agreed Wednesday "to work towards peace" in a spat over an oil- and gas-rich region of the Indian Ocean, said the office of Ethiopia's prime minister, who mediated in talks between the neighbours.

Somalian President Abdullahi Mohamed and his Kenyan counterpart Uhuru Kenyatta met in Nairobi to try and resolve a bitter maritime border dispute, with Ethiopia's Abiy Ahmed there to moderate.

This came after Kenya accused Somalia of selling oil and gas blocks at a London auction last month, despite a pending delineation case before the International Court of Justice (ICJ).

"As an outcome, both agreed to work towards peace & to take measures in addressing particular issues that escalated the tensions," it added.

Last month, Nairobi recalled its ambassador from Mogadishu for "urgent consultations" over the disputed area, believed to hold lucrative offshore oil and gas deposits in a part of Africa only recently found to be sitting on significant reserves.

Kenya said it had acted because of an "egregious decision by the government of Somalia to auction off oil and gas blocks in Kenya's maritime territorial area that borders Somalia".

It accused Somalia of an "unparallelled affront and illegal grab at the resources of Kenya".

But Somalia rejected the allegations, saying it would not "undertake any unilateral activities in the disputed area" until the ICJ had ruled on the matter.

Based in The Hague, the tribunal rules in disputes between countries, and has been hearing a case brought by Somalia in 2014.

Its final ruling will significantly impact a potential new source of revenue for either of the east African neighbours.

Somalia, which lies northeast of Kenya, wants to extend its maritime frontier with Kenya along the line of the land border, in a southeasterly direction.

But Kenya wants the border to head out to sea in a straight line east, giving it more territory.

The disputed triangle of water stretches over an area of more than 100,000 square kilometres (40,000 square miles).