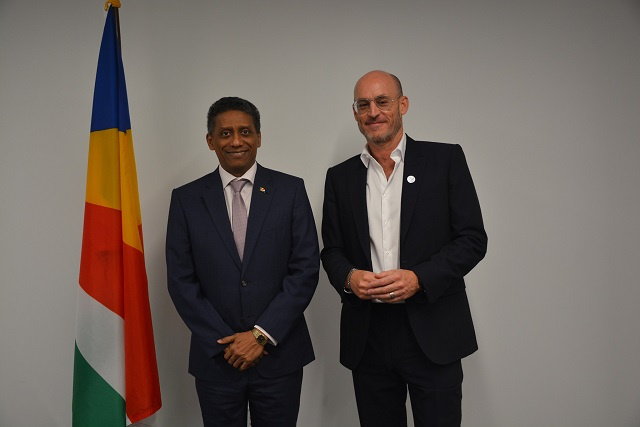 Faure met with the Ted Waitt, the chairman and founder of the Foundation and Institute, in New York where he is attending the 74th Session of United Nations General Assembly. (State House/Facebook)

(Seychelles News Agency) - The President of Seychelles, Danny Faure, has expressed gratitude to the Waitt Foundation and Waitt Institute for the contribution made towards the island nation’s successful implementation of the debt swap, State House said on Friday.

Faure met with the Ted Waitt, the chairman and founder of the Foundation and Institute, in New York where he is attending the 74th Session of United Nations General Assembly.

“Together with the blue bonds, the Seychelles Conservation and Climate Adaptation Trust (SeyCCAT), which manages the proceeds of the debt swap, is now offering around $750,000 in grants a year to Seychellois citizens for sustainable marine activities. These include youth, women and scientists,” he said.

Seychelles reached a major debt buyback agreement worth $30 million with the Paris Club group of creditors and South Africa in the French capital in 2015. Under the agreement, the debt was transferred to a trust which will ocean spaces of the archipelago in the western Indian Ocean.

“The expedition helped provide Seychelles Government with scientific justification for increasing the protected area around Aldabra as part of the 30% of marine protected areas under the debt swap,” added the President.

The Waitt expedition and partners from National Geographic’s Pristine Seas programme undertook an expedition to Seychelles in March 2015. Expedition leader Paul Rose and a team of scientists and filmmakers worked from the Waitt Expedition ship on Aldabra, Assumption and Cosmoledo Islands.

On his part, Waitt accompanied by the Executive Director Heather Zichal of the Blue Prosperity Coalition, thanked Faure for his commitment to raising greater awareness of Ocean protection and Blue Economy matters not only locally, but also at both regional and global levels.  Faure was also thanked for being a voice for island states by spearheading efforts leading to boosting ocean health, resilience, sustainability and climate action in line with Marine Protection

Discussion also included widening the areas of partnership between Seychelles and the Waitt Foundation through the possible support with a comprehensive Blue Economy Strategy.