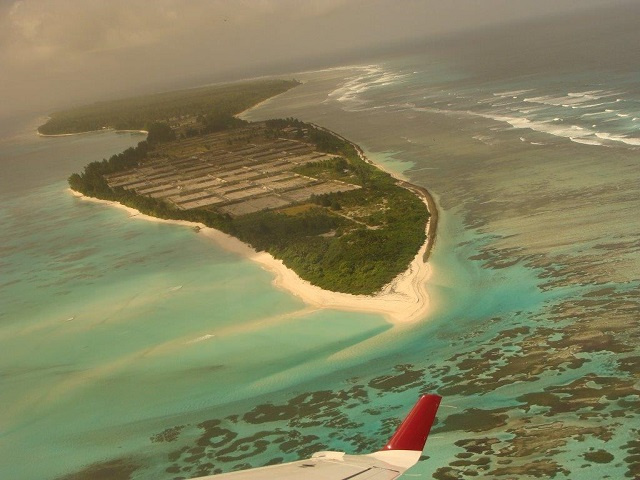 The chief executive of the Islands Development Company (IDC) told the press that Coëtivy is an island where prawn farming and extensive agriculture will be reintroduced. (Aubrey Lesperance)

Aquaculture and large-scale farming will soon be restarted on some of the outer islands of Seychelles, the company that manages and develops the outer islands said Wednesday.
The chief executive of the Islands Development Company (IDC) told the press that Coëtivy is an island where prawn farming and extensive agriculture will be reintroduced, adding that this can help the economy of the island nation to bounce back from the economic doldrums of COVID-19.
“We need to integrate the private sector for intense farming on the island. For aquaculture we are calling on the private sector to join with us, as we will be using all the existing facilities on Coëtivy and we would not need to spend money to reinvent anything,” said Glenny Savy.
Savy explained that the company will need to bring in foreign workers for the farm as prawn farming is very labour-intensive. He added that the target for production for a year will be 80 to 100 tons which he said is enough for the local market.
The principal aquaculture officer at the Seychelles Fishing Authority, Aubrey Lesperance told SNA that Coëtivy Island was found to be the most suitable site in Seychelles for commercial prawn farming because it already has a lot of the characteristics in place.
“Such as flat land and high-quality seawater, electricity supply, accommodation, and basic infrastructure still available. It also provides the potential for production and supply to the local market to reduce the current imports of prawns. Prawn farming was and can still be done on Coëtivy provided the right management and skills are in place as well,” explained Aubrey Lesperance.
Lesperance added that this would also provide a good opportunity for jobs on the outer island.  “Diversification of activities on Coëtivy will make it more economically feasible to run the prawn farm now if other economic activities like agriculture and tourism are also considered and combined with it,” said the officer.
Prawn farming is not new to the 115 islands archipelago in the western Indian Ocean. In 1989, in collaboration with the Seychelles Marketing Board, IDC developed a black tiger prawn farm on Coëtivy Island, with broodstocks imported from Madagascar and Mozambique. The farm, however, was deemed not profitable and ceased its operations in 2009.
Whilst the issue of agriculture on the outer islands was being reconsidered, the impact of COVID-19 on the company has hastened this decision. Savy said that the company has been affected by up to 70 per cent as tourism was an activity taking place on some of the islands it manages. Savy explained that for years now the company has adopted strategies to diversify its activities.
As for agriculture, this has always been done as a way of sustaining the islands. On some islands, this was once done on a large scale, amongst which Coëtivy, Silhouette, Farquar, Desroches, and Providence which were being driven a hundred percent by agriculture and where the main products were vegetables, pork, beef, chicken, copra and coconut oil.
“Recently we had taken the decision since Coëtivy was coming back to the group of islands managed by IDC and has many potentials principally for agriculture. So, we have done a lot of preparation to kick start agriculture on Coëtivy. For the moment we are also meeting with private farmers who are interested to develop agriculture on the outer islands,” explained Savy.
The chief executive added that products from the outer islands will be only for local consumption.
Fisheries » Be a reporter: Write and send your article » Subscribe for news alert
Tags: aquaculture, large-scale farming, prawn farming, Islands Development Company, Seychelles Fishing Authority, COVID-19