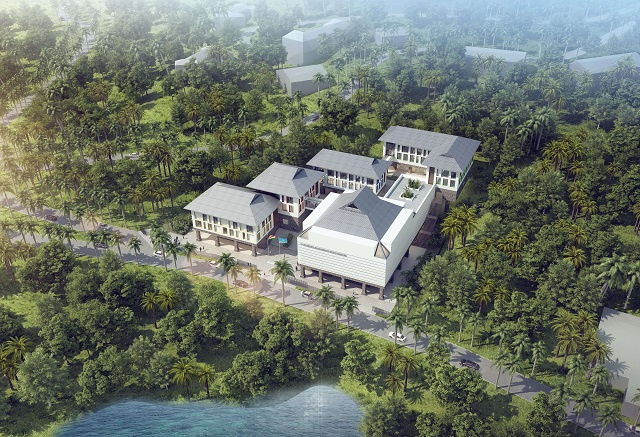 Once completed, the building will occupy an area of 5,600 square metres and will be comprised of different buildings annexed together to accommodate both TV and radio services. (Seychelles Broadcasting Corporation)

(Seychelles News Agency) - Work on the construction of a five-storey building for the Seychelles Broadcasting Corporation (SBC) is progressing well and expected to be completed in April next year, the Corporation said Monday.

Construction of the building called 'SBC House' at Union Vale in the central district of English River started in April 2019.

The project was originally expected to be completed by the end of this year but encountered a six-week delay following adverse weather and ground conditions towards the end of 2019.

"We had a delay with the foundation where we took six months instead of three months as we needed to increase the amount of piling," said the project manager, Dereck Rioux.

The COVID-19 pandemic has caused further delay to the project in the first quarter of 2020 as the restrictions imposed did not allow differently skilled workers to enter Seychelles, an archipelago in the western Indian Ocean.

"Now we are being delayed by the COVID situation because with the structure completed those workers have to go back home and around 30-45 other workers were expected to have arrived for the finishing work," he added.

The SBC House is being financed by a grant from the Chinese government and the contractor is Hunan 6 Engineering Company. The estimated cost for the project is SCR240 million ($13 million), inclusive of furniture and equipment.

Once completed, the building will occupy an area of 5,600 square metres and will be comprised of different buildings annexed together to accommodate both TV and radio services.

Major concrete works have been completed and internal wall block works are ongoing. The next phase of the project will be the roof structure which is expected to start by the end of August.

Another work which still needs to be done is the partitioning of the offices which is not in the contract of the present Chinese company.

"The building comes with an open space design which for the moment is not enough to cater for all the staff of SBC. We've made a proposition with the government for us to partition the building as it nears completion. We were told that since this is a grant and the design has already been approved, the project has to be completed and then we will do partitioning project for the building," said Rioux.

Another facility that will need to be finalized is a parking facility for the SBC house as per condition set by the Planning Authority upon approval of this project.

"SBC has got approval to reclaim an area opposite the building for a staff carpark and SBC transport fleet. This is now on hold until we get the go ahead and financial approval," the project manager said.