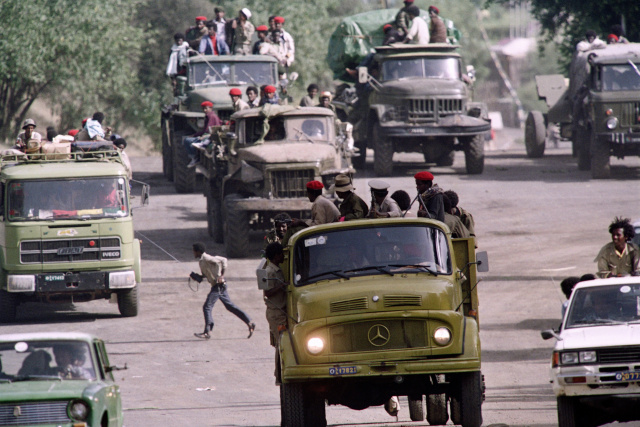 (FILES) In this file photo taken on May 29, 1991 Ethiopian People's Revolutionary Democratic Front (EPRDF) reinforcements drive to the presidential palace in Addis Ababa following numerous anti-EPRDF and anti-U.S. demonstrations in which at least six people were gunned down. Spearhead in the fight against the Derg dictatorship, then a real power in Ethiopia for a long time, the Tigray People's Liberation Front (TPLF), which the Ethiopian army fights in its northern stronghold of Tigray, has shaped recent history of the country. (Jerome DELAY / AFP)

(AFP) - Ethiopia's army chief on Thursday accused WHO boss Tedros Adhanom Ghebreyesus -- the country's highest-profile Tigrayan abroad -- of lobbying for and seeking to arm leaders in the conflict-torn dissident region.

Prime Minister Abiy Ahmed unleashed a military campaign against the northern region on November 4 with the declared aim of unseating its ruling party, the Tigray People's Liberation Front (TPLF), which he accuses of defying his government and seeking to destabilise it.

Army chief Berhanu Jula told a press conference that Tedros, who served as minister of health under TPLF leader Meles Zenawi, was "a part of that team", referring to the party.

"He has worked in neighbouring countries to condemn the war. He has worked for them to get weapons," said Berhanu.

He said Tedros had "left no stone unturned" to help the TPLF, the party Abiy says he is targeting in a military offensive in the region.

"What do you expect from him? We don't expect he will side with the Ethiopian people and condemn them," he said.

Tedros has yet to respond to the accusation.

The 55-year-old was appointed as the first African head of the WHO in 2017 and has become a household name as he grapples with the Covid-19 pandemic. He has been ranked as one of Time magazine's most influential people.

Abiy's government insists its target is the "reactionary and rogue" members of the TPLF and not average civilians in Tigray.

But observers have voiced concern about Tigrayans losing their jobs or being arrested for their ethnicity.

The TPLF led the overthrow of Mengistu Hailemariam, head of Ethiopia's military Derg regime, in 1991 and dominated politics for three decades until the arrival of Abiy who was appointed in 2018.

The party has complained about being sidelined under Abiy, and scapegoated for the country's woes, and a bitter feud with the central government this year led them to hold their own elections in defiance of a postponement due to the coronavirus.

On November 4, Abiy said the TPLF had attacked two federal military camps in the region, crossing a "red line".

His controversial campaign has seen warplanes bombing Tigray and heavy fighting, while Amnesty International has documented a gruesome massacre.

A communications blackout in Tigray has made claims difficult to verify, but the overall toll is believed to be in the hundreds.

Meanwhile the UN says a "full-scale humanitarian crisis" is unfolding, with 36,000 people having streamed into neighbouring Sudan, according to that country's refugee commission.

The International Committee of the Red Cross (ICRC) said Wednesday that the Ethiopia Red Cross Society had "transported hundreds of people injured in areas affected by clashes."

Abiy this week insisted the military operation was in its final phase, and his government has said it is marching towards the regional capital Mekele after a string of victories.

A senior Tigrayan official, Wondimu Asamnew, said in an email that Tigrayan forces "have adopted a defensive posture on all fronts".

A statement from Tigray president Debretsion Gebremichael said Thursday that the army had "called upon assistance from an outside force, with drones starting to be used in the battle."

Since the start of fighting, hundreds of people have been arrested for allegedly conspiring with the TPLF, while 34 businesses had their bank accounts suspended for alleged links to the TPLF.

The federal police late Wednesday announced arrest warrants for 76 army officers, some retired, accused of conspiring with the TPLF and "committing treason".

The government has also said it has "credible and specific evidence" of TPLF operatives working for local and international organisations.

"Given the incredibly tense and volatile context in the country, Ethiopian authorities should push back against language and measures that fuel intolerance and risk alienating Tigrayans from all walks of life."

General » Be a reporter: Write and send your article » Subscribe for news alert
Tags: Ethiopia, Tigray, WHO