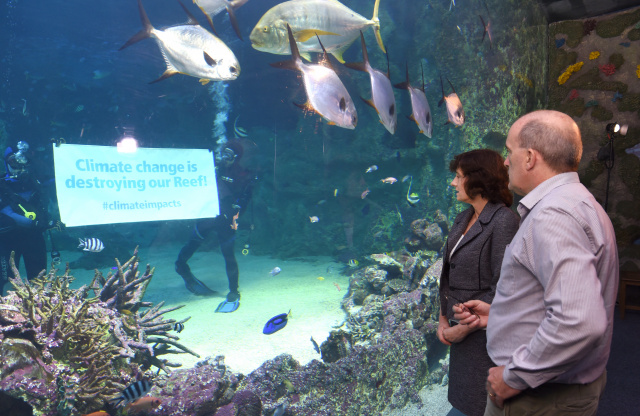 Professors Ove Hoegh-Guldberg (R) and Lesley Hughes (2/R) stand in front of a Great Barrier Reef exhibit at the SEA LIFE Sydney Aquarium during the launch of their Intergovernmental Panel on Climate Change (IPCC) Working Group II (WGII) report, on March 31, 2014. Soaring carbon emissions will amplify the risk of conflict, hunger, floods and migration this century, the UN's expert panel said in a landmark report on the impact of climate change. Left unchecked, greenhouse gas emissions may cost trillions of dollars in damage to property and ecosystems, and in bills for shoring up climate defences, it said. (AFP PHOTO/William WEST)

(AFP) - Australia said Tuesday it will strongly oppose a UNESCO plan to list the Great Barrier Reef as "in danger" over deterioration caused by climate change.

The UN body released a draft report on Monday recommending the reef's World Heritage status be downgraded because of its dramatic coral decline, after years of public threats to do so.

Environmental campaigners said the decision highlighted Australia's lack of action to curb the carbon emissions which contribute to global warming.

Environment Minister Sussan Ley said Australia would challenge the move, accusing UN officials of backflipping on their assurances ahead of the World Heritage Committee's 44th session in China next month, where the recommendation will be formally considered.

"Politics have subverted a proper process and for the World Heritage Committee to not even foreshadow this listing is, I think, appalling," she told reporters in Canberra.

The UN body did not consider the billions of dollars spent attempting to protect the world's largest coral reef, she added.

The committee's draft report did commend Australia's efforts to improve reef quality and its financial commitment.

But it noted "with the utmost concern and regret... that the long-term outlook for the ecosystem of the property has further deteriorated from poor to very poor," referring to Australia's move to downgrade the reef's health status after back-to-back mass bleaching events in 2016 and 2017.

Placement on the UN body's in-danger list is not considered a sanction. According to UNESCO, some nations have their sites added to gain international attention and help to save them but it is seen as a dishonour by others.

Australia has resisted calls to commit to a target of net-zero carbon emissions by 2050, with Prime Minister Scott Morrison saying the country hoped to reach carbon neutral "as soon as possible" without harming its commodity-dependent economy.

The Climate Council said it brought "shame on the federal government, which is standing by as the reef declines rather than fighting to protect it".

"The recommendation from UNESCO is clear and unequivocal that the Australian government is not doing enough to protect our greatest natural asset, especially on climate change," said WWF head of oceans Richard Leck.

Aside from its inestimable natural, scientific and environmental value, the 2,300-kilometre-long (1,400-mile-long) reef was worth an estimated US$4.8 billion a year in tourism revenue for the Australian economy before the coronavirus pandemic.

In December, the International Union for Conservation of Nature (IUCN) said climate change had pushed the reef into critical condition.

"Australia's climate record is more consistent with a 2.5-3.0 Celsius rise in global average temperature –- a level that would destroy the Great Barrier Reef and all the world's coral reefs," she said.

The Great Barrier Reef has now suffered three mass coral bleaching events in the past five years, losing half its corals since 1995 as ocean temperatures have climbed.

Bleaching occurs when changes in ocean temperatures stress healthy corals, causing them to expel algae living in their tissues, which drains them of their vibrant colours and can lead to their death.

It has also been battered by several cyclones as climate change drives more extreme weather and outbreaks of crown-of-thorns starfish -- which eat the coral -- in recent decades.

General » Be a reporter: Write and send your article » Subscribe for news alert
Tags: Australia, UNESCO