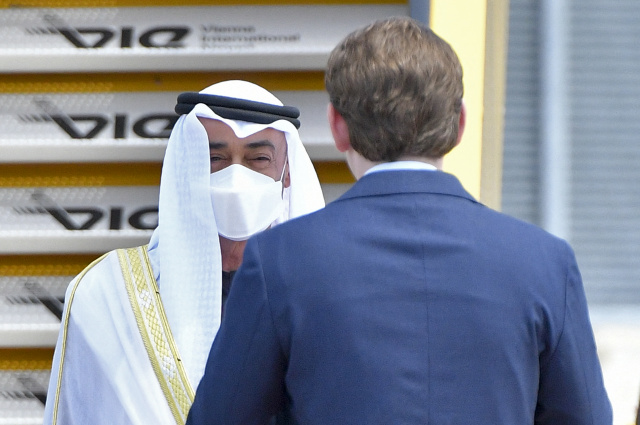 The two men will address a number of issues, among them regional developments which are likely to include Afghanistan.

Tensions have simmered in Afghanistan since the United States completed its withdrawal last month, with sporadic street protests erupting in cities and armed resistance to Taliban rule in the Panjshir valley.

France said on Monday it will contribute 100 million euros ($118 million) for emergency humanitarian work in Afghanistan after the Taliban grabbed power.

The Taliban's takeover sparked a chaotic exit for the Americans and their allies after 20 years in the country.

During the evacuation, France set up an air bridge at the UAE's Al-Dhafra air base for people evacuated from Kabul.

French Foreign Minister Jean-Yves Le Drian confirmed on Monday there were "very few" French nationals still stranded in Afghanistan, saying that they only numbered in the dozens.

Some 2,800 people were evacuated from Afghanistan by France, including 2,600 Afghans, he said.

The UAE has set up an air bridge to deliver tonnes of aid to Afghanistan after the Taliban takeover, a Kabul airport operations manager told AFP on Saturday.

The wealthy UAE, a close US ally, is one of a number of Gulf states that have been key staging posts for evacuation flights for foreigners and Afghans, alongside Qatar, Kuwait and Bahrain.

General » Be a reporter: Write and send your article » Subscribe for news alert
Tags: UAE, France