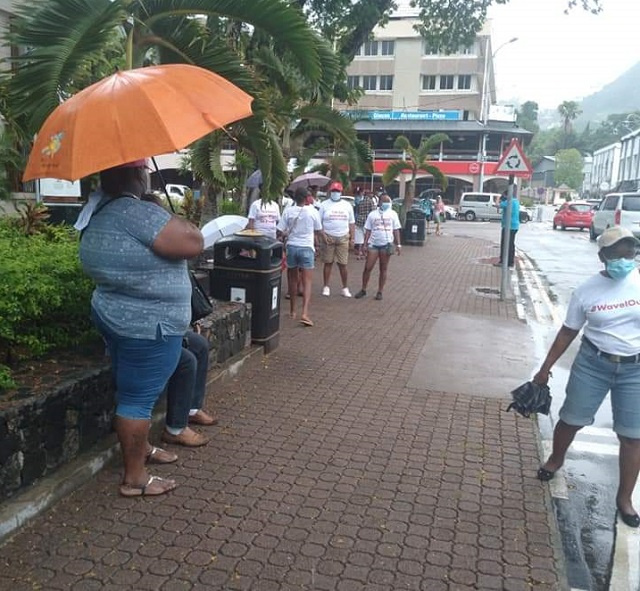 There were around 30 people protesting in the streets around the Victoria clock tower. (Seychelles News Agency)

(Seychelles News Agency) - Around 30 people protested in Victoria on Saturday despite rainfall against measures announced by the government they said were unfair to Seychellois workers.

Dressed in attires with protest words and banners, the protesters were stationed near the clock tower. The group protested against the rise in bus fares from SCR 7 to SCR 10, the suspension of the 13th month salary and the continued hike in prices of commodities.

"There are many families suffering due to these sudden increases in prices. What happens to those of us who have four or five children to maintain? How do we cope?" said Lindy Henri, one of the protestors.

Effective October 1, bus fares for commuters using the buses of the Seychelles Public Transport Corporation (SPTC) are SCR10 for travel card holders and SCR12 for non-cardholders.

The suspension of the 13th month salary for the second consecutive year was announced by the Ministry of Employment on Thursday.

One of the organisers, Gerry Sopha, who is the vice president of the United Workers of Seychelles union, said the protest is one way to get the voices of workers heard.

"We will continue doing so until we see an improvement in our current conditions," said Sopha.

He echoed the statement of Antoine Robinson, the secretary general of the Seychelles Federation of Workers union on Friday.

"The voice of the workers is not being heard and yet the workers are at the heart of the country's economy. Since the pandemic workers have kept working even amidst the economic difficulty," Robinson told SNA.

A few people started protesting with banners in the capital a few weeks ago but the numbers have increased since then.

Seychelles, an archipelago in the western Indian Ocean, has restrictions in place on large gatherings amid the COVID-19 pandemic. In the revised restrictions on September 3 only meetings with over 30 people need the approval of the Public Health Authority.

Sopha told SNA that his organisation had made a formal request to the Commissioner of Police prior to holding the protests to which they were given the conditions under which to proceed.

Officers of the Seychelles Police Force were present to ensure that the event took place peacefully.