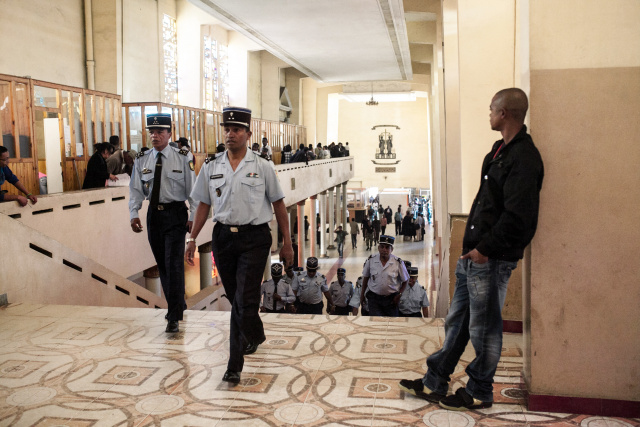 Malagasy gendarmerie officers arrive to attend the trial of twenty-one people, including two Frenchmen accused of a plot to stage a coup and assassinate President Andry Rajoelina. (AFP PHOTO/RIJASOLO)

(AFP) - Twenty-one people, including two Frenchmen, went on trial in Madagascar on Monday accused of a plot to stage a coup and assassinate President Andry Rajoelina.

The defendants face charges ranging from criminal association to compromising state security and planning to kill the head of state.

The alleged operation has been called the "Apollo 21" plot.

The defendants "put together a plan to eliminate or neutralise various Malagasy public figures including the head of state," according to the prosecution.

The two Frenchmen are Paul Rafanoharana, 58, a dual French-Malagasy national who is a former advisor to the president, and Philippe Francois, 54, an ex-colonel in the French army, who ran an investment company in Madagascar called Tsarafirst.

The spouses of the pair are also among the defendants.

A clean-shaven Rafanoharana, wearing a dark blue suit and black glasses, smiled repeatedly to friends in the public throughout the first hours of the court sitting.

Francois, dressed in a white shirt, appeared thin and tired-looking.

Dozens of special forces and police officers lined the room's faded yellow walls, an AFP stringer said at the scene. Some were armed and in plainclothes.

Some of the 21 have been placed under legal supervision while others, including the two French nationals, are in prison detention.

Arlette Rafanomadio, defending Rafanoharana and his wife, told AFP at the weekend that the trial was "unjust."

"We haven't had enough time to prepare our defence strategy and access to our clients has been difficult," she said.

In a case whose supporting documents run to 400 pages, she had been able to spoke to her clients for just half an hour on Friday, Rafanomadio added.

A group of Francois' former classmates at France's elite Saint-Cyr military academy said in a statement that they were certain of his innocence and urged "the calmest debates possible and respect for the defendants' rights" during the trial.

Journalists were allowed to attend the public hearing, which defence lawyers said should last three or four days, although cameras have been banned.