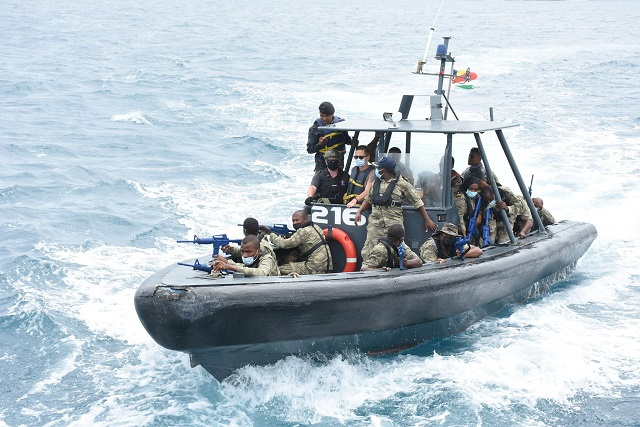 Cutlass Express is a maritime exercise that takes place every year to promote national and regional maritime security in East Africa and the Western Indian Ocean. (Seychelles Nation)

The multinational military exercise called Cutlass Express hosted by Seychelles took place from February 8-18 with the participation of 12 nations. Cutlass Express is the U.S. Africa Command's largest naval training exercise in the Indian Ocean, bringing together U.S. forces and regional partners to share their expertise and experience.

During the closing ceremony, the chief of the Seychelles Defence Forces, Brigadier Michael Rosette, expressed his satisfaction with the improvement shown by the local forces.

"I want to congratulate the local soldiers for their high-level achievement. They had a lot of training and many preparations were made for the exercise. I am confident that should we face anything in our waters, our forces are well equipped to deal with it," said Rosette.

"Not only does Cutlass help to ensure the security of the waters of the Western Indian Ocean, but it also reminds us of the intangible attributes required to assure maritime security: vigilance, sacrifice, and partnership," said the U.S. embassy Chargée d'Affaires Judes DeBaere.

She said that there is "vigilance because we know threats remain and it is necessary to train for these threats. Sacrifice because our valued time, resources, and efforts are devoted to this exercise, and partnership, which is a foundational aspect of this exercise."

Cutlass Express 2022 included in-port training as well as scenarios at sea and a symposium for senior leaders. Most of the training is aimed at simulating scenarios of detecting and apprehending suspect vessels engaged in illicit activity.

Seychelles, a group of 115 islands spread over an exclusive economic zone of 1.4 million square kilometres, finds it difficult to deter and suppress illegal activities at sea, due to its immense maritime space.

The island nation signed a bilateral agreement, the first of its kind, with the United States in July last year, through which it will get help to protect its territorial waters.