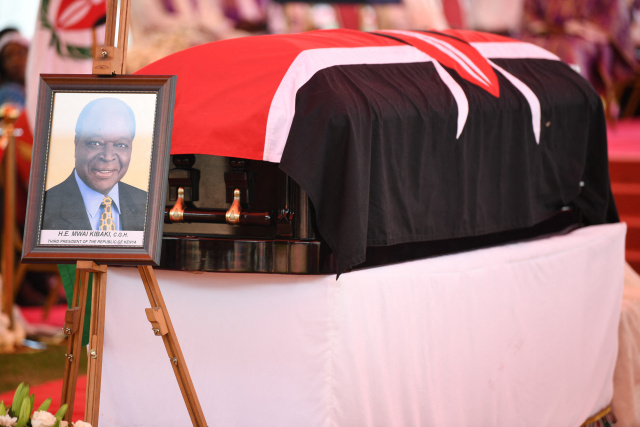 The flag drapped coffin of former Kenyan President Mwai Kibaki lies in state during the memorial service at the Nyayo National Stadium in Nairobi on April 29, 2022. (SIMON MAINA / AFP)

(AFP) - Kenya held a state funeral on Friday for former president Mwai Kibaki, who died aged 90 last week and whose decade in power was marked by economic revival as well as scandal and violence.

Kibaki was the third head of state in Kenya's history, serving from December 2002 to April 2013 following the 20-year authoritarian regime of Daniel arap Moi and preceding current President Uhuru Kenyatta.

Benches at Nyayo National Stadium in the heart of the capital Nairobi were full under a heavy sky as the procession accompanying Kibaki's coffin arrived.

"This is marvellous. Kibaki deserves this kind of respect," said Calvin Omweri, a 40-year-old shoe-shiner who followed the procession.

"Kibaki did a lot for this country and we owe him a lot of respect," he said, unable to enter the stadium because of the arrival of dignitaries.

Alongside ambassadors, officials and members of the government, a dozen heads of state and prime ministers were expected from across the African continent, including South African President Cyril Ramaphosa and South Sudanese President Salva Kiir.

Kibaki, who trained as an economist in Uganda and London, was elected in 2002 after promising to tackle corruption. But his decade in power was marred by scandals and Kenya's worst political violence since independence.

In late 2007, his disputed re-election led to violence between the Kikuyu and Kalenjin, two of the country's largest communities. More than 1,000 people were killed and hundreds of thousands were displaced.

He also oversaw the adoption of a new constitution in 2010 with reforms aimed at preventing such unrest.

However, Kenya experienced strong economic growth under his leadership, notably through his Vision 2030 programme, taken up by Kenyatta, which allowed the launch of major infrastructure projects as well as health and education reforms.

Leading religious and political figures took to the tribune in the afternoon for prayers and to pay homage to the former president, whose coffin was covered in a heavy Kenyan flag.

They paid tribute to the legacy and intellect of the former president who had also served as a lawmaker, minister and opposition chief.

"Mwai Kibaki was a gentleman, a man of convictions, a man who loved perfection," said veteran Kenyan leader Raila Odinga, who is making a fifth run for the presidency in August elections.

"It will be of deep sadness to your country to have lost a great statesman, but Kenya can take pride in the legacy of his leadership," the queen said in a message of condolence to President Kenyatta on Thursday.

"We remember the leadership Kibaki demonstrated not just in Kenya but on the continent," Ramaphosa said.

The circumstances of Kibaki's death have not been made public. His health suffered following a serious car accident in 2002 and he was regularly admitted to hospital in recent years.

The former president is due to be buried on Saturday in the town of Othaya, 80 kilometres (50 miles) north of Nairobi, where he spent time after leaving office.

General » Be a reporter: Write and send your article » Subscribe for news alert
Tags: Kenya, politics