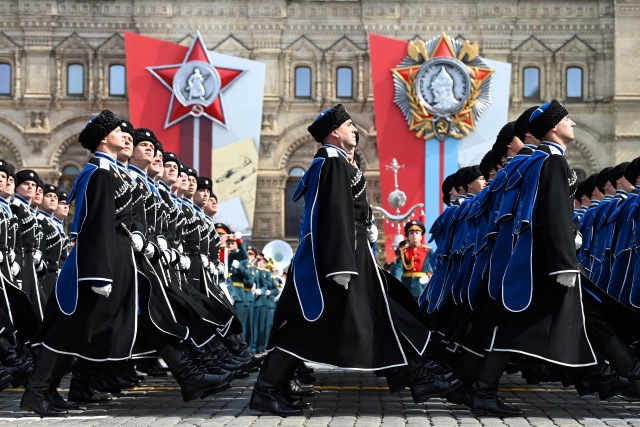 Cossacks march on Red Square during the general rehearsal of the Victory Day military parade in central Moscow on May 7, 2022. Russia will celebrate the 77th anniversary of the 1945 victory over Nazi Germany on May 9. (Kirill KUDRYAVTSEV / AFP)

(AFP) - Russia will celebrate its 1945 victory over Nazi Germany Monday with a show of military might as its army battles Kyiv's forces in the east of Ukraine, where 60 people were killed in an air strike on a school sheltering civilians.

President Vladimir Putin is set to flaunt Russia's power in celebration of Victory Day, in an event that has taken on great prominence as he seeks to justify a war that has gone on far longer -- and at far higher cost -- than expected.

But as huge missiles are towed through Moscow's Red Square and a planned flyover will feature fighter jets showing support for the war, Ukraine will be desperately battling to stop a hoped-for military breakthrough.

And civilians continue to bear the brunt of the bloodshed, with President Volodymyr Zelensky confirming that 60 were killed in a Russian air strike on a school in the eastern village of Bilogorivka -- one of the highest one-day tolls since Moscow's forces invaded on February 24.

Lugansk region governor Sergiy Gaiday said rescuers were searching for survivors in the debris left by the Russian attack on the school there, though the outlook was bleak.

"Bombs fell on the school," he said on Telegram, "and unfortunately it was completely destroyed."

To the south, in the devastated port city of Mariupol, depleted Ukrainian forces are defending their final bastion at the Azovstal steelworks, from which scores of civilians have been evacuated in recent days.

An AFP reporter in the city of Zaporizhzhia said Sunday that eight buses carrying 174 civilians -- including 40 evacuated from the plant -- had arrived in that Ukrainian-controlled city.

"The latest information that I have from both Ukraine and Russia is that there are no more civilians there (Azovstal), but we are not in a position to verify. We weren't inside the plant," Osnat Lubrani, the UN's humanitarian coordinator in Ukraine, told AFP.

More than 600 civilians have now been safely evacuated from the steelworks and other areas of Mariupol, the UN said.

"We hoped everyday for an evacuation," said Vladymyr Babeush, 41, an Azovstal evacuee who worked at the plant and was among those who arrived in Zaporizhzhia.

"And now we are done waiting. We're so thankful to everyone involved."

The evacuations leave a small force of defiant defenders holed up in Azovstal's sprawling network of tunnels and bunkers.

"We, all of the military personnel in the garrison of Mariupol, we have witnessed the war crimes performed by Russia, by the Russian army. We are witnesses," said Ilya Samoilenko, an intelligence officer with the far-right Azov regiment defending the site.

"Surrender is not an option because Russia is not interested in our lives."

Full control of Mariupol would allow Moscow to create a land bridge between the Crimean peninsula, which it annexed in 2014, and eastern regions run by pro-Russian separatists.

Some have speculated that Putin is seeking to achieve that goal in time for Victory Day.

"The enemy is trying to finish off the defenders of Azovstal, they are trying to do it before May 9 to give Vladimir Putin a gift," Oleksiy Arestovych, an aide to Ukraine's president, said.

The Russian leader has sought to legitimise his invasion of Ukraine by comparing it with the previous struggle against Nazism and the national pride it brought.

"Today, our soldiers, as their ancestors, are fighting side by side to liberate their native land from the Nazi filth with the confidence that, as in 1945, victory will be ours," Putin said.

Ukraine's Zelensky also marked the end of the war by comparing his country's battle for national survival to the region's resistance against its former Nazi occupiers.

"Decades after World War II, darkness has returned to Ukraine, and it has become black and white again," he said, in a monochrome social media video shot before a bombed-out apartment block.

"Evil has returned, in a different uniform, under different slogans, but for the same purpose," he warned.

The group in a statement said Putin's "unprovoked war of aggression" had brought "shame on Russia and the historic sacrifices of its people".

The White House said the G7 was "committed to phasing out or banning the import of Russian oil".

But EU diplomats will meet again this week to hammer out the details of their latest sanctions package against Moscow, after a proposed embargo on Russian oil exposed rifts in the bloc.

Canadian Prime Minister Justin Trudeau said Putin was responsible for "heinous war crimes" as he visited Irpin, a suburb on the northwest edge of Kyiv that was the scene of heavy fighting in the early weeks of the conflict.

Local mayor Oleksandr Markushyn posted pictures on social media and said Trudeau "came to Irpin to see with his own eyes all the horror that the Russian occupiers had done to our city".

On the ground, the key battles are being fought in Ukraine's east.

In Severodonetsk, a dozen jumpy and exhausted soldiers cowering under a bridge from incoming shellfire formed Kyiv's last line of defence against Russia's assault on this easternmost city still held by Ukraine.

The city's fall would grant the Kremlin de facto control of Lugansk -- the smaller of the two republics comprising the Donbas war zone.

A clear pattern has emerged on Ukraine's eastern front.

Ukrainian units are counterattacking and making gains to the east of the northern city of Kharkiv.

The Russians, in turn, are chewing up territory roughly 100 miles (160 kilometres) to the southeast of the Ukrainian push.

The soldiers in Severodonetsk looked too tired to put on a brave face.

"I would rather not guess how long we can hold on. All I can say is that we are here now," said their unit commander.

"The best way to describe the situation? Critically stable," he said with a sardonic laugh.