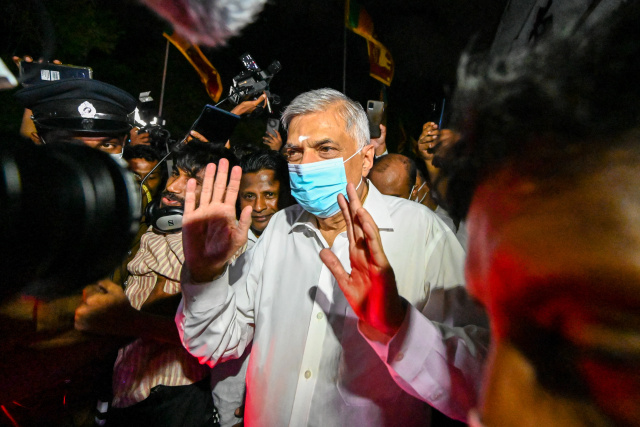 (AFP) - Sri Lanka's embattled president swore in a new prime minister Thursday to replace his brother, who was banned from leaving the country after his supporters launched violent attacks on a protest against the nation's economic crisis.

The new premier, Ranil Wickremesinghe, has already served in the office five times -- but it remains to be seen whether he will be able to get any legislation through parliament.

The 73-year-old will be tasked with navigating Sri Lanka through the worst downturn in its history as an independent nation, with months of shortages and blackouts inflaming public anger.

"We want to return the nation to a position where our people will once again have three meals a day," Wickremesinghe said after his appointment.

"Our youth must have a future."

In a bid to win over opposition lawmakers demanding he quit, President Gotabaya Rajapaksa, 72, had pledged to give up most of his executive powers and pave the way for a new cabinet.

Mahinda Rajapaksa, the president's brother, resigned as prime minister on Monday after his supporters attacked anti-government demonstrators who had been protesting peacefully for weeks.

This marked a turning point and unleashed several days of chaos and violence in which at least nine people were killed and over 200 injured, with dozens of Rajapaksa loyalist homes set on fire.

On Thursday, a court banned Mahinda, his politician son Namal, and more than a dozen allies from leaving the country after ordering an investigation into the violence.

"Congratulations to the newly appointed Prime Minister," Mahinda tweeted from the Trincomalee naval base on the country's east coast, where he took refuge after fleeing the capital Colombo.

"I wish you all the best as you navigate these troubled times."

A curfew was lifted Thursday morning -- only to be reimposed after a six-hour break allowing Sri Lanka's 22 million people to stock up on essentials.

Sri Lankans have suffered months of severe shortages of food, fuel and medicine -- as well as long power cuts -- after the country burnt through foreign currency reserves needed to pay for vital imports.

The central bank chief warned Wednesday that the economy would "collapse beyond redemption" unless a new government was urgently appointed.

Wickremesinghe is seen as a pro-West free-market reformist, potentially making bailout negotiations with the International Monetary Fund and others smoother.

With many from Rajapaksa's party having defected in recent months, no group in the 225-member assembly has an absolute majority, making parliamentary approval of the unity government's legislation potentially tricky.

Wickremesinghe insisted he had enough support to govern when speaking to reporters after his appointment.

But it remains to be seen whether a new cabinet will be enough to calm public anger if Rajapaksa continues to resist calls for his resignation.

"What he has done is despicable, he has brought all of us to this state of hunger and poverty," Abu Nawaz, a small business owner in Colombo, told AFP.

"What is the point of keeping him as the president?" he added. "Will this end our miseries?"

Wickremesinghe had already been working closely with Rajapaksa before his appointment to push through sweeping policy changes, an official close to their discussions told AFP.

"His appointment as PM, and the quick formation of an inclusive government, are first steps to addressing the crisis," US ambassador to Sri Lanka Julie Chung tweeted.

The main opposition SJB party was initially invited to lead a new government, but its leader Sajith Premadasa insisted the president first step down.

In recent days the party has split, with a dozen SJB lawmakers pledging support to Wickremesinghe.

"We must address the economic crisis," said the party's Harin Fernando. "We can't wait any longer."

Wickremesinghe was greeted by a small group of supporters as he arrived to pray at a Buddhist temple in Colombo after he was sworn in.

But members of Sri Lanka's influential Buddhist clergy have already signalled their dissatisfaction with the appointment of the veteran politician, who served as premier as recently as 2019.

"What we asked for is a new government that will include fresh blood, not those whose who have already been rejected by the people," said leading monk Omale Sobitha.