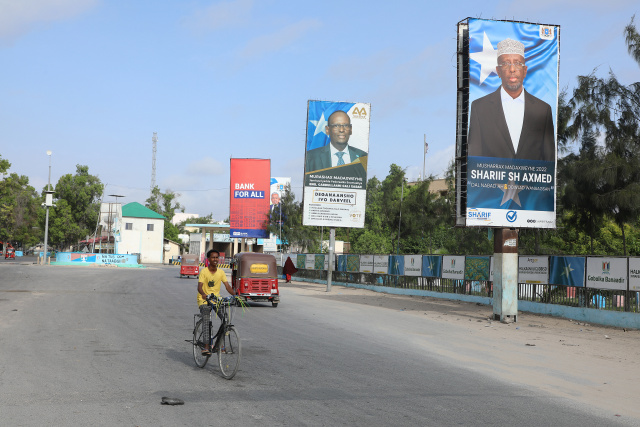 A Somali man cycles past election banners of presidential candidates along a street in Mogadishu on May 13, 2022. (Hassan Ali ELMI / AFP)

(AFP) - Somali lawmakers gathered in Mogadishu Sunday to vote in the country's long-overdue presidential election, with 35 candidates vying for the top job in the troubled Horn of Africa nation as it battles an Islamist insurgency and the threat of famine.

The poll has been dogged by claims of irregularities and is well over a year behind schedule, with Somalia's international partners warning that the delays -- caused by political infighting -- were a dangerous distraction from the fight against Al-Shabaab jihadists.

The vote will be held under tight security in a tent inside Mogadishu's heavily-guarded airport complex, with little movement seen in the capital where police have imposed a curfew until Monday. Flights have also been cancelled, an official told AFP on condition of anonymity.

The vote is expected to draw a line under a political crisis that has lasted well over a year, after President Mohamed Abdullahi Mohamed's term ended in February 2021 without an election.

"We are tired of living with uncertainty... I hope a president will be elected and today is the end of the nonsense," Muktar Ali, a Mogadishu resident, told AFP.

An African Union force is securing the election venue, after a spate of attacks in recent weeks by Al-Shabaab which has been fighting to overthrow the government for more than a decade.

Voting can only begin once two-thirds of the membership of both houses of parliament are present, with the process expected to take several hours and stretch late into the night.

Four candidates dropped out of the race Saturday, and more are expected to do so today during multiple rounds of voting, narrowing the options until a winner is chosen.

The victor must secure a minimum of 184 votes.

Somalia has not held a one-person, one-vote election in 50 years. Instead, polls follow a complex indirect model, whereby state legislatures and clan delegates pick lawmakers for the national parliament, who in turn choose the president.

The contenders have vowed to tackle Somalia's myriad problems and bring relief to citizens weary of violence by Al-Shabaab jihadists, surging inflation and a worsening drought that threatens to drive millions into famine.

The jihadists controlled Mogadishu until 2011 when they were pushed out by an African Union force, but still hold territory in the countryside.