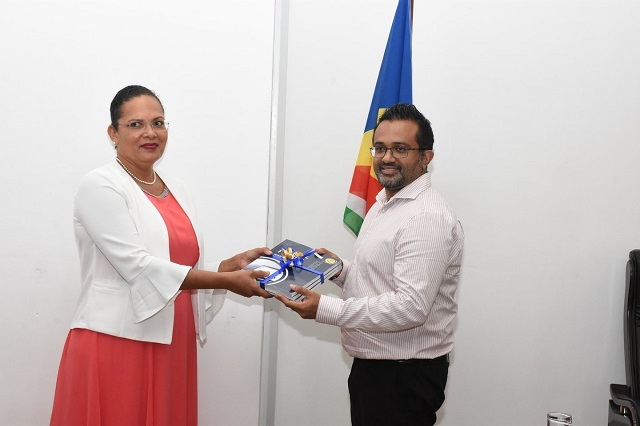 The Seychelles Revenue Commission (SRC) has collected $490 million (SCR6.5 billion) in revenue for 2021, an increase of 9 percent over the 2020 figure, and $14 million in arrears, a top official said on Thursday.

The report was presented to Seychelles' finance minister Naadir Hassan by SRC's commissioner general Veronique Herminie in a short ceremony at Liberty House in the capital Victoria.

In his address, Hassan said that SRC plays an important role in the country's development and its work is a very crucial one.

"As we all know, we need to earn money in order to be able to spend it and this is the role that SRC plays, as they are tasked with collecting the revenue that the government can use to invest in the national budget," said Hassan.

Emmaline Camille, director for corporate planning and research, gave a brief summary of the report, which showed an increase in revenue compared to 2020, where a total of $474 million (SCR6.3 billion) was collected. Therefore, the amount of revenue collected represents an increase of $28 million compared to the fiscal year 2020 which amounts to a 9 percent increase.

"SRC also came up with numerous outreach programmes such as kiosks in numerous areas, which was to encourage people to pay their taxes and this has helped bring in more revenue," said Camille.

SRC also had an amnesty programme in 2021 to encourage people who had arrears to come forward to pay to avoid penalties. In 2021, a total of $14 million was collected for arrears.

"We intend to do other similar programmes in the future and we will also work on a compliance improvement plan which will be piloted soon," said Camille.

She added that the focus is not on enforcement but on making it easier for people to comply.

In terms of the breakdown of revenue collection, 69 percent of the total revenue collected was from domestic taxes, the main source of revenue, while the other 31 percent came from customs operations.

The Seychelles Revenue Commission (SRC) is the body responsible for the administration of revenue laws in Seychelles, an archipelago in the western Indian Ocean.