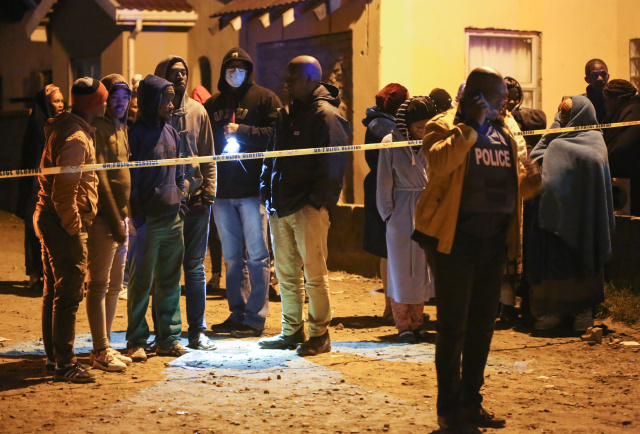 Members of the community and family wait for news outside a township pub as a police officer talks on a phone in South Africa's southern city of East London on June 26, 2022, after 20 teenagers died. At least 20 teenagers, the youngest aged just 13 years, have died at a township pub in South Africa's southern city of East London, but the cause of the deaths is still unclear. Crowds of people including parents whose children were missing gathered outside the tavern located along a street in a residential township as mortuary vehicles collected bodies, according to an AFP correspondent. (Photo by AFP)

(AFP) - South African police were on Monday combing a township tavern where 21 teenagers mysteriously died as survivors described a battle to escape the jam-packed premises and one reported a suffocating smell.

Officials have ruled out a stampede as the cause of the deaths.

Most of the victims, some as young as 13, were found dead inside a popular bar in the southern coastal city of East London.

Seventeen died inside the bar, while four died later in hospital. The victims included 13 boys and eight girls.

Thirty-one others were hospitalised with symptoms including backache, tight chests, vomiting and headache, officials said.

Most were discharged on Sunday, leaving two in hospital, they said.

The fatalities bore no visible signs of injury, sparking initial speculation among local officials and politicians that this was a case of underage drinking that had gone tragically wrong.

"But the suspicion is that it is something either they ingested through drinks, food, or something they inhaled," Unathi Binqose, a government official on safety, told AFP.

Politicians expressed their shock at the deaths.

"It has never happened that our country loses children in this manner," Elleck Nchabeleng, who chairs the parliamentary committee on education and technology, sports, arts and culture.

"This unfortunate and unprecedented incident underscores the importance of vigilance from parents."

But new details emerged Monday as survivors spoke of a strong and suffocating smell in the jam-packed double-storey building.

Sinovuyo Monyane, 19, who was hired by the bar to promote an alcohol brand, said she was still "confused" but felt lucky to be alive.

She said she struggled to escape through a door gridlocked with people.

"We tried moving through the crowd, shouting 'please let us through,' and others were shouting 'we are dying, guys,' and 'we are suffocating' and 'there are people who can't breathe'," she told AFP.

"I passed out at that moment. I was running out of breath and there was a strong smell of some type of spray on in the air. We thought it was pepper spray," she said.

She later regained consciousness after someone sprayed water on her.

"I got up and realised that there were bodies lying around. I saw people being poured water, but those people did not even move," she said in a phone interview.

"I could have died."

A member of staff at the bar, Sifiso Promise Matinise, told AFP he sprinkled water on the unconscious people to revive them, thinking they were drunk, before realising what had happened.

"I saw two people collapse, they died," he said.

Special investigators from Pretoria have been rushed to the scene but no arrests have been made so far.

Many of the victims are thought to have been students celebrating the end of their high-school exams, officials said.

Autopsies are being conducted to see if the deaths could be linked to poisoning.

Forensic analysis will be conducted this week.

"Samples were taken and were on (the) first flight today to Cape Town, where the tests will be conducted," said Binqose.

Drinking in South Africa is permitted for over-18s.

But in township taverns which are often located cheek-by-jowl with family homes, safety regulations and drinking-age laws are not always enforced.

President Cyril Ramaphosa is among those who have voiced concern.

The teenagers reportedly "gathered at a venue which, on the face of it, should be off-limits to persons under the age of 18", he said.

A resident DJ, Luhlemela Ulana, who was also celebrating his birthday on the night, spoke of a rush of revellers who forced their way into an already packed venue.

"We tried to close the door, but people kept pushing. The bouncers could not handle the crowd that was pushing from outside the entrance door. There were so many people," the DJ said.

He turned off the music to try to discourage the revellers, but to no avail.

The crowd was just "unruly and could not be managed", he said, adding he was "traumatised".

About 100 mourners attended an emotional prayer service at the Assemblies of God church in the Scenery Park township, where local municipal councillor Monica Goci broke down on the pulpit with a microphone in her hand.