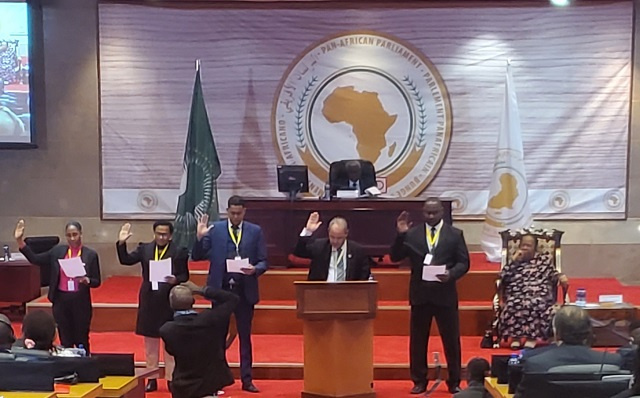 Terence Mondon, the elected member for the Takamaka district from the ruling Linyon Demokratik Seselwa (LDS) party, was elected as the chairperson of the Eastern Caucus at the event, which took place from June 27 to July 2 in South Africa.

This is the first time that a small country like Seychelles, an archipelago in the western Indian Ocean, assumes this position.

Mondon, who presided over the first meeting for proposals of members on different committees, has affirmed his engagement to bring the institution to greater heights.

Another Seychellois parliamentarian, Wavel Woodcock, was elected as the fourth vice-president for the Youth Caucus.

Woodcock, who is the LDS elected member for the district of Grand Anse Praslin has appealed for more youth representation in African national, regional and continental parliaments.

The delegation from Seychelles was made up of five Members of the National Assembly who were all sworn in as Members of the PAP. The other three Members were Sylvanne Lemiel for the district of Anse Royale and Conrad Gabriel for the Pointe Larue district both from United Seychelles (US) opposition party as well as Deshiela Bastienne of the Perseverance district from LDS.

The Pan-African Parliament (PAP) is the African Union's consultative assembly created in 2004. Its aim is to ensure the full participation of African people in the economic development and integration of the continent. The PAP is made up of more than 200 Members of Parliament representing some 50 members of the African Union appointed by their respective parliaments.

The sixth ordinary session was the first physical event of PAP since the outbreak of COVID-19. A Member of Parliament (MP) from Zimbabwe, Fortune Charumbira, was elected as the new Speaker of the Pan-African Parliament, succeeding Cameroon's Roger Nkodo Dang.