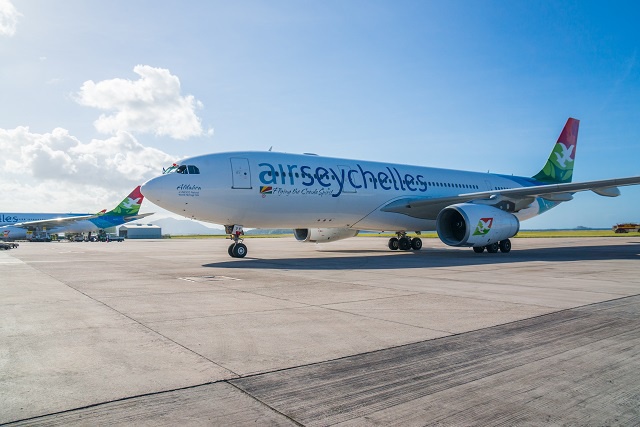 (Seychelles News Agency) - The national airline of the Seychelles archipelago will receive a share of $700 million raised on international markets last week as part of a ‘platform financing transaction’ for Etihad Airways and its strategic partners.

The Abu Dhabi-based carrier announced on Tuesday last week that it had raised $500 million, followed by a subsequent boost of another $200 million following what Etihad termed as “high demand” from international financial institutions, bringing the total of funds raised thus far to $700 million.

The funds were raised through a special-purpose financial vehicle and issued on a five-year bond at 6.875 percent from institutions such as Goldman Sachs International, ADS Securities and Anoa Capital. Although Etihad has already raised $11 billion dollars to date for its own expansion strategy, this marks the first time that Etihad has raised funding for its partner airlines as well.

Etihad and its airport services business will receive 20 percent of the funds, and two of its partner airlines – airberlin and Alitalia – will also receive a 20 percent share each, accounting for 80 percent of the total funds raised.

Another 16 percent of the funds will be allocated to Jet Airways, and the remainder – just four percent – will be divided up between Air Seychelles and Air Serbia.

The chief executive officers of the six Etihad Airways partner airlines met in Rome yesterday to "identify and progress collaborative initiatives designed to cut the carriers’ costs, increase their revenues, and expand sustainable choice for their customers", according to an Etihad press statement issued on Monday.

Although it is not yet known what exact percentage share Air Seychelles will receive of the four percent earmarked for it to share with Air Serbia, two percent of the $700 million total would be equal to $14 million.

In an email statement issued to SNA by an Air Seychelles spokesperson On Friday, it was revealed that the amounts allocated to each airline were “based on their actual debt requirements”.

“Air Seychelles will refinance its current debt and additional working capital. The principal amount has to be repaid in five years,” said the statement.

But the amount received by Air Seychelles may even exceed current expectations, as the Air Seychelles spokesperson clarified that the fundraising exercise was still underway, meaning that additional funding could still be added to the total amount of $700 million.

“The amount that will be allocated to Air Seychelles will be the percentage share of the total amount raised once the finance raising process is completed.”

The success of the fundraising initiative was a “major endorsement” of the businesses’ shared strategies, said the President and CEO of Etihad, James Hogan.

“A key element of our equity partner strategy is creating a total which is greater than the sum of its parts, a grouping which can work together to improve revenues, reduce costs and uncover exciting new business synergies,” said Hogan.

“We have already been able to identify significant opportunities together, whether that be in shared IT platforms, joint fleet procurement or shared training costs. Commercial fundraising is no different. Our proposed transaction is simply the next logical step in our growing partnership and underpins its strategic importance”.

On March 12 this year, Air Seychelles released their key results for 2014, declaring $3.2 million in net profits, however, in a statement issued to local media from corporate communications by email on March 24, the national carrier said that a mission visit from the International Monetary Fund (IMF) had pointed out that the company was operating at a loss.

"...the IMF reviewed the airline’s profit and loss, balance sheet, and strategic plan. While the airline’s management detailed to the IMF significant growth in the business and improvement in key indicators, the IMF observed that the airline had declared a profit at a net level, which includes all revenue and costs, but had incurred a loss at an operating level," read the statement.

"The IMF expressed that Air Seychelles should also disclose financial results at an operating level, in addition to results at a net level."

In 2014, Air Seychelles was allocated a total of $8.5 million from the national supplementary budget to finance the purchase of Twin Otter aircraft for the airline’s domestic inter-island routes.

From the 2015 budget, the national carrier was given a capital injection of $5 million to cover its outstanding liabilities and a further $2 million to cover the marketing costs of its nonstop Paris flights, which commenced in July.

For now, it remains unclear which debts the funding from Etihad will refinance, but the decision could signal a move away from depending on government funding to cushion its operating losses.

When the appointment of the current Chief Executive Officer, Roy Kinnear, was announced in June, the chairman of Air Seychelles, Joel Morgan, who is also the Seychelles Minister of Foreign Affairs and Transport, announced that according to the Air Seychelles’ Board’s strategic plan, Air Seychelles was expected to be completely financially self-sufficient by 2017, and would by then no longer require regular capital injections from its shareholders.

According to the airline’s latest audited financial statements, in 2014, the national airline’s revenue totalled $106.9 million, while their operating, administrative and marketing costs totalled $125.4 million, representing an operating loss of $18.5 million, explained by auditors as initial losses from the large capital investments required by the opening up of new aviation routes.

The Executive Board of Directors at the International Monetary Fund (IMF), which in its latest statement on the conclusion of its 2015 Article IV Consultation with Seychelles, encouraged the Seychelles authorities to “push ahead” with its strategy to improve the financial performance of their public enterprises, a strategy which Minister Morgan says the airline is already working towards.