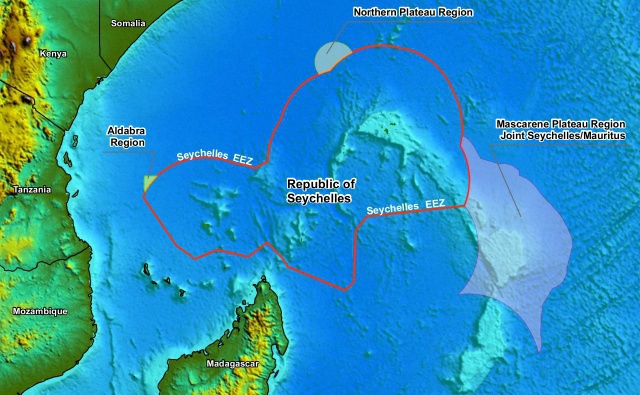 The Mascarene Plateau, situated to the south-east of the Seychelles Exclusive Economic Zone, is jointly managed by Seychelles and Mauritius, and the Northern Plateau Region to the west, a claim submitted by Seychelles to the UN. The Aldabra Region is being proposed for shared management between Tanzania and Seychelles. ( Seychelles News Agency)

(Seychelles News Agency) - Seychelles and Mauritius have agreed to set up a headquarters for the joint management of the Mascarene Plateau, the co-chair of the Seychelles’ technical committee said on Monday.

The two countries have also agreed to their first-ever ministerial meeting on the plateau.

In an interview with SNA, co-chair of the committee Philippe Michaud said these decisions were taken at the end of a weeklong discussion between the two island nations in Victoria, the capital of Seychelles.

“It will be a bit like the Indian Ocean Commission that has its headquarters based in Seychelles.  Firstly, we need to have an agreement on how the headquarters will be managed, its rights and regulations,” Michaud said.

He added that, “we are already working on these aspects and we are finalizing things so that we can soon have a final agreement with Mauritius.”

Seychelles, a group of 115 islands in the western Indian Ocean, hopes to have the headquarters based in its capital Victoria, but this has not yet been given the final approval by its Mauritian counterparts.

“There will also be a meeting for ministers from Seychelles and Mauritius that is expected to take place in Seychelles before the end of the year,” says Michaud.

Seychelles and Mauritius, a neighbouring island nation in the Indian Ocean, have been meeting since 2002 to discuss how to jointly manage the Mascarene Plateau.

The Plateau is a large shallow area ranging from 8 to 150 metres in depth in the Indian Ocean, situated north and east of Madagascar. The shelf extends approximately 2,000 km from Seychelles in the north to Reunion in the south, covering an area of over 115,000 square kilometres.

Seychelles and Mauritius hope that by the end of the year the administrative aspects of the management of the plateau will be completed, Michaud said.

The countries also agreed on other areas during the five-day discussion.

“One of the things that both sides agreed, is to send letter to companies that will be interested to do a geotechnical survey within the zone and they are given a deadline to submit their application,” says Philippe Michaud.

Other meetings are also scheduled for this year, including a legal meeting planned for April in Mauritius and the technical and council meetings proposed for May.