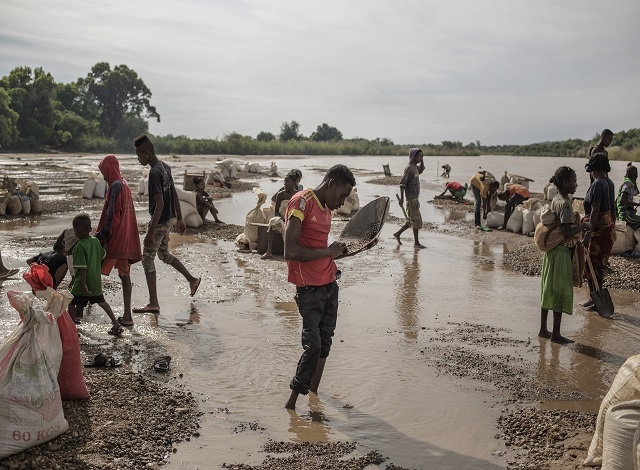 Malagasy workers from an informal Sapphire mine seep soil through a strainer in the waters of a river looking for gems on December 2, 2016 on the outskirts of Sakaraha, Madagascar. Sapphires were first discovered in Madagascar in the late 1990s, and already the Indian Ocean island is one of the world's largest producers of the precious stones. (GIANLUIGI GUERCIA / AFP)

(AFP) - The dusty figure is lowered slowly into the ground like a bucket into a well, armed with just a crowbar, a shovel and an old, unreliable headlamp.

In the surrounding countryside, bodies rise and sink from hundreds of holes just wide enough for a man.

Children run between the rubble and the smell of cooking wafts from the makeshift shelters where women crouch over pots.

Guards armed with hunting rifles stand by, turning the settlement of Betsinefe into a threatening scene.

In the world of Madagascan sapphire mining, there are few rules.

Sapphires were first discovered in Madagascar in the late 1990s, and already the Indian Ocean island is one of the world's largest producers of the precious stones.

Its 250-kilometre-long (155-mile) deposit is among the biggest in the world and has sparked a sapphire rush.

Activity at this informal, though not entirely illegal, mine in the southwest of the country was suspended recently by authorities after scuffles broke out between villagers and would-be miners flocking in from the rest of the island.

Andry Razafindrakoto, a 19-year-old student from the nearest big town of Tulear, was one of the many hoping to make their fortune.

"I came here to mine sapphires because it's difficult to find work in other areas," he told AFP.

When he sold his haul of stones for some four million ariary ($1,200), he bought his own equipment and today manages a small team of nine miners.

- 'Sometimes we find nothing' -

But success stories are rare.

Like most of his fellow miners, Albert Soja does not earn wages for his countless, gruelling trips underground. To make money, he must find and sell stones.

"Of course it's scary, but when you want to succeed, you have to take risks," he said, a woollen beanie pulled tightly on his head despite the suffocating heat.

"Sometimes we find nothing... it can take months to find something interesting."

Without sapphires to sell, he depends on the mine "bosses" -- gem shop owners, usually of Sri Lankan origin, in the neighbouring town of Sakaraha -- for a few handfuls of rice or manioc to survive.

"The bosses pay for our food and materials, which helps us hold out. Without their help, we would starve," said Soja.

"After that, we're obliged to sell them the stones we find."

Sitting behind his desk in his gem shop in Sakaraha, Sunil W.J. -- as he calls himself -- examined his latest buy of blue and pink and light yellow sapphires under a lamp.

His two "bodyguards" toured the surrounding mines to collect the stones and pay for miners' food.

The best finds are sent to Sri Lanka, to be polished, cut and sold, Sunil explained.

Theoretically, the extraction of sapphires is regulated by Madagascar's mining code, which insists on permits and the redistribution of a share of the taxes to benefit local municipalities.

In practice, the industry is largely unregulated, but it is a lucrative trade, said Sunil.

A stone that fetches $300 in Sri Lanka costs him less than a tenth of the price to buy from a miner in Madagascar.

On the question of taxes, Sunil was less certain of his figures, but said he paid a 10 percent export tax to authorities in the capital Antananarivo.

"These small sapphire mines are beyond the control of the state, so there are no official statistics," Mines Minister Ying Vah Zafilahy told AFP, vowing industry reform to bring them under formal regulation.

A local elected official in Sakaraha, who asked to remain anonymous, said the municipality was not receiving any taxes or income from the many mining operations underway.

"Some days are better than others, but this business has a future," said Sunil, laughing.