Opposition supporters march in Seychelles, demanding that the president resigns 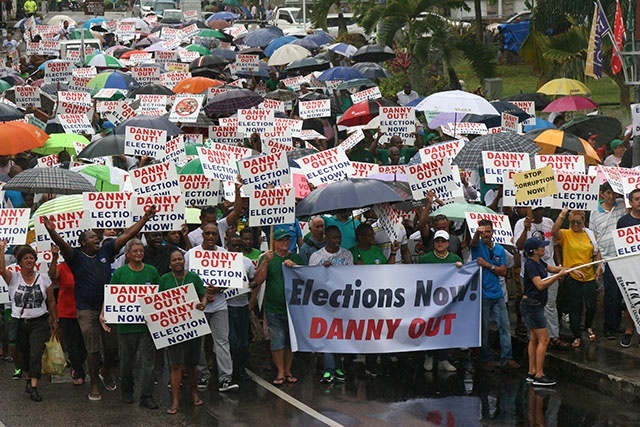 (Seychelles News Agency) - Demanding the resignation of the Seychelles’ President Danny Faure, supporters of the Seychellois opposition party -- Linyon Demokratik Seselwa (LDS) -- marched in the streets of Victoria, the capital, on Saturday.

Despite the rain, hundreds of supporters of Linyon Demokratik Seselwa (LDS) marched and chanted "Danny out" while carrying placards.

Linyon Demokratik Seselwa believes that the time has come to put a stop to the wastage of state resources, the sale of public land, easy access to Seychellois nationality, and a lack of leadership in state institutions.

"We want to show President Faure that we have the support of the Seychellois people," Roger Mancienne, the President of the LDS, told SNA.

With two years remaining until the next presidential election in Seychelles, the opposition is increasing pressure on Faure to resign.

The head of state of Seychelles has said on several occasion that there will be no new presidential elections as he is planning to serve his full mandate. Faure assumed power on October 16 in 2016 after former President James Michel resigned 10 months into his third and final five-year mandate at the helm of the island nation’s government.

The next presidential election is due end of 2020.

Since the last legislative elections in September 2016, Seychelles, an archipelago in the western Indian Ocean is in a cohabitation. The government is led by Parti Lepep while the LDS holds a majority in the National Assembly – the legislative body.

Once again, the opposition reaffirmed its opposition to any foreign presence on the island of Assumption.

Seychelles and India signed a 20-year agreement in January that will enable the construction of military infrastructures on Assumption Island. The government decided not to go ahead with the project after the Opposition Leader in the National Assembly, Wavel Ramkalawan, said LDS will not ratify the agreement following demonstrations by concerned citizens.

"President Faure showed us that we cannot trust him because he told us something and then he did something else," said Mancienne.

He added that “we must correct the mistakes that have been made over the last 40 years.”

Next week the LDS plans to travel to La Digue, the third most populated island to continue their campaign for the departure of President Faure.

This is the second time that the opposition supporters have taken to the streets to demand the resignation of President Faure. In August last year, supporters of Lalyans Seselwa – previously part of LDS – demonstrated quietly in the capital to demand new presidential elections in 2018.