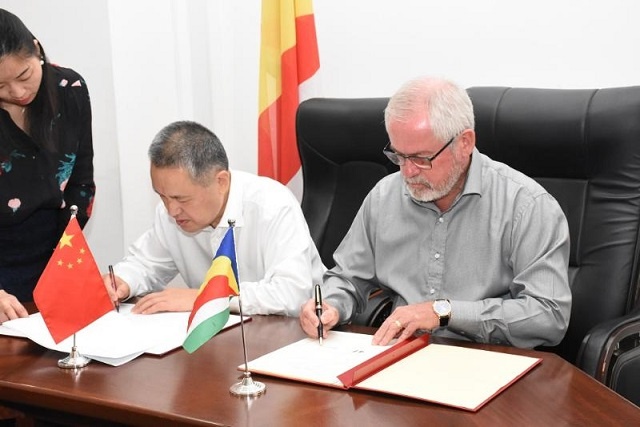 The first agreement was signed by the Seychelles’ Minister for Finance, Trade, Investment and Economic Planning, Maurice Loustau Lalanne, and Zhang Mao, the Chinese Minister for State Administration for Market Regulation (SAMR).

“The agreement will establish a sort of direct line between the two countries to deal with any issue that is raised during trade. We don’t have to go to any other country, we can communicate with China directly to solve any issue,” said Cillia Mangroo, the principal secretary for trade.

Many shops in Seychelles, a group of 115 islands in the western Indian Ocean, sell products made in China.

Mangroo said that a lot of people in Seychelles buy things from China that are not up to standard and “this agreement will help to notify us on places in China that are not selling genuine items to prevent it from entering the country.”

The other agreement which was signed by the Seychelles’ Fair Trading Commission and the SAMR includes capacity building for staff working at the commission, encourage cooperation in the fields of competition policy, consumer protection and market surveillance.

The chief executive of the Fair Trading Commission, Francis Lebon, told SNA that the agreement is very important in that it will establish a platform to share information and develop expertise through staff exchange.

“China is a very big economy. It has made positive steps in that past few years in the field of consumer development, consumer rights and market surveillance. Our aim is to tap into this expertise,” said Lebon.

On his side, Mao said that both the agreements will further facilitate trade between China and Seychelles.

He said that his country is looking forward to work with Seychelles to set up a good trade system.

Opening trade connectivity between China and Seychelles was discussed during the visit of the President of Seychelles, Danny Faure, to the world’s most populous country in September last year.

After Faure met with Chinese President Xi Jinping in Beijing, the two leaders witnessed the signing of the agreement on economic and technical cooperation between Seychelles and China.

The agreement provides for a new grant of $7.5 million to implement projects in Seychelles which will be mutually agreed by the two governments.

The relationship between China and Seychelles has been developing well since the establishment of diplomatic ties on June 30, 1976.