7 Seychellois women to participate in second edition of FemBioBiz competition 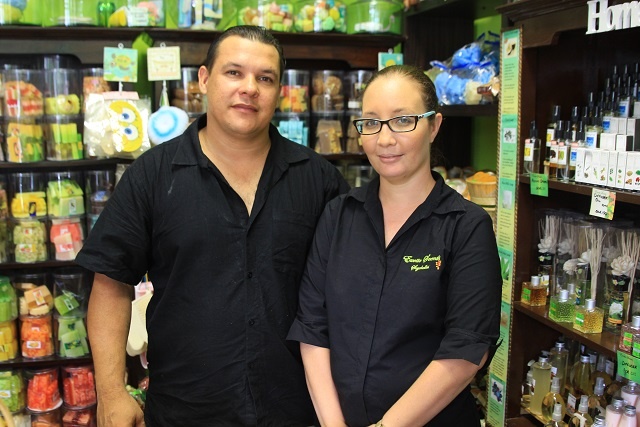 Maria Sullivan who was also chosen in the first round is the owner of Exotic Scents together with her husband John Sullivan. (File photo: Joe Laurence, Seychelles News Agency)

Seven Seychellois women are competing in the second edition of the FemBioBiz competition. Beauty products, added value to bamboo, and products from seaweed and sea cucumber are ideas which were revealed during the pitching meeting held Wednesday at the Guy Morel Institute.

Maria Sullivan, an entrepreneur, and Stana Mousbe from the Seychelles Maritime Academy were chosen as winners of the first round.

“This is a Fembio project aimed at empowering women. Yes at the end of this there is an element of competition but for me, it is this journey which is the most important,” said the Executive Director of the institute Shella Mohideen.

The FemBioBiz Acceleration Programme was created to develop leadership, technological and business skills in female-owned businesses within the Southern African Development Community (SADC). The programme creates a platform for peer learning and will empower women to lead in health and nutrition through science and technology.

Processing sea cucumber and using its extract as a natural supplement is the idea which Mousbe presented to the panel of four judges. “From my research sea cucumber has anti-fungal, anti-tumour and immune boosting properties,” explained Mousbe, 17, who is currently studying fisheries science.

Mousbe added that sea cucumber “reduces chronic diseases, can stabilize blood sugar level in diabetics and assist with weight loss.” The young student explained that the supplement can be taken in liquid form as it can be easily mixed with beverages such as juice, tea but not with alcohol products.

According to Mousbe this species found in abundance in the island nation’ waters is being underutilised as currently it is only being consumed as food.

Maria Sullivan is the co-owner of Exotic Scents and her new line of products is using coconuts. Sullivan has already developed soap and body butter from coconut - which once upon a time, like copra, was the backbone of the Seychelles economy.

“It has been scientifically proven that cold press coconut oil is a superfood, it is good for many diseases including heart issues, to treat gum diseases and is good for the hair,” explained Sullivan, who added that extracting the oil in the cold press way retains all the virtues of the coconut.

Sullivan explained that through her products she is using all of the coconuts so as to ensure that nothing is wasted.

Both Mousbe and Sullivan will, along with other participants, participate in the second round scheduled for July. Then one winner will be selected to attend the regional event in South Africa in September. Last year, entrepreneur Claudette Albert won the local competition with her cassava biscuits.

Peter Roselie, a business consultant assisting with preparing the participants for the regional competition, said that this is a great opportunity “to get young women even at the secondary and post-secondary level to start thinking about entrepreneurship. And now we have different programmes like SeyCCat, the seeds capital. They should tap in and develop their ideas. If we want to develop a culture of entrepreneurship we should start at schools.”