A healthier sandwich and salad shop opens in Seychelles 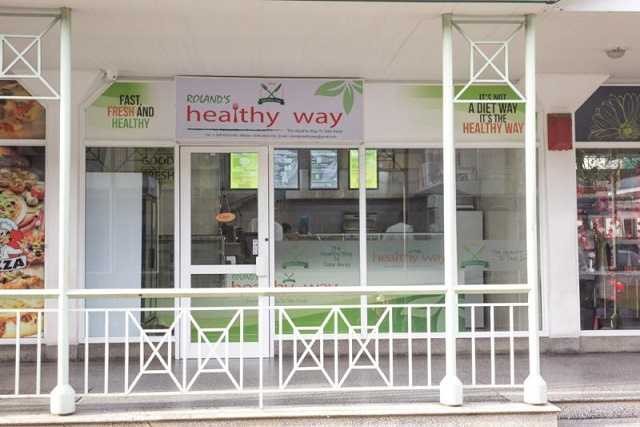 The takeaway outlet is located in the Trinity House building in the capital Victoria. (Salifa Karapetyan)

(Seychelles News Agency) - Building your own sandwich and choosing your own salad ingredients are two of many options available at a newly opened healthy food take away outlet in Seychelles.

‘Roland’s Healthy Way’ -- the brainchild of Roland Payet -- opened its doors to clients last week and offers an array of different sandwiches, salads, wraps and burgers. The takeaway outlet is located in the Trinity House building in the capital Victoria.

At the cost of SCR70 ($5), a person can buy a sub sandwich where they can choose between beef, pork, chicken, ham, smoked fish, tuna or sausage as their source of protein. To that one can add two vegetables and dressing of choice.

Still want more in your sub-sandwich? Solve that by adding extra meat, vegetable or topping, all at an additional cost.

“We are not limiting people on their choices - they can always add on to what is on the menu,” said Payet, who is also the managing director of the takeaway.

It took the entrepreneur a year to set up the business, something he said could have been done faster had he not encountered some delays on the side of regulatory bodies in the country.

With ‘Fast, fresh and healthy’ as the motto of the outlet, Payet told SNA that as much as possible they prepare food upon order and use fresh, healthful products.

“Most of the food is prepared upon order, as we do not want to produce too many foods which will end up not being sold. In the morning we prepare some ready-made salads and sandwiches which are all sold during the day. We also do not want to use preservatives in our food,” he said.

Payet explained that there are instances where imported and processed products are used. ‘Roland’s Healthy Way’ removes skin and most fat from their meat and chooses to roast or grill their meat instead of frying them.

“Healthy Way wants to give the best and hence in the near future, we will get as much raw material as possible and preparing them ourselves before using and serving. We are working closely with some farmers in Seychelles because we want to get local products,” said Payet.

Payet said that obesity is quite high in the country and it is something that has personally affected him.

“Since I started setting up the business, I have been using the products that I am serving and have noticed a change in my physique,” said Payet.

He added however that healthy food is not cheap and “to make it affordable it is not easy, but we have been having good feedback from the public.

A customer, Ranjan Orphee, said that the opening of the ‘Roland’s Healthy Way’ has come at an opportune time.

“As the sign says, it is a takeaway where you can get healthy food. I am trying to keep my weight down but nowadays, snack shops are selling oily food and as a client, you don’t really have a choice. But now, if you are trying to maintain your health, there is a place to get your food,” said Orphee.

Kelly Rene and Rita Soomery both said that such an outlet is a good initiative as it will help a lot of people to have a better diet and health.

“It was about time that such a place opened in Seychelles,” said Rene.

The team of five serves clients from 8 a.m. to 8 p.m. from Mondays through to Thursdays. On Fridays and Saturdays, the business is open until 10 p.m. and is closed on Sundays.

Not a nutritionist himself, Payet said that he consults one to be able to provide the healthiest food possible.

In future, ‘Roland’s Healthy Way’ wishes to introduce tuber crops such as cassava and sweet potato on the menu, as well as other hot dishes.