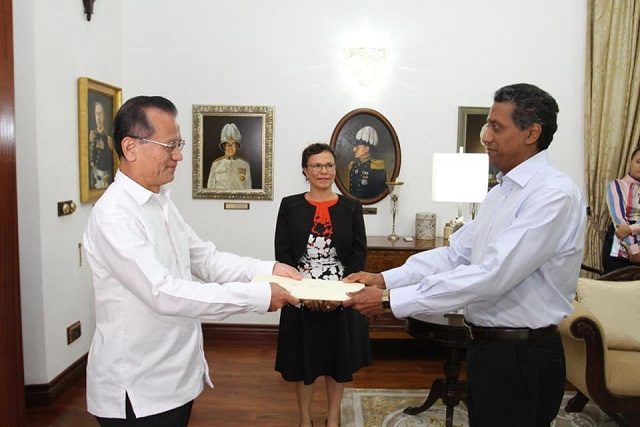 (Seychelles News Agency) - A Japanese embassy will open in Seychelles on Thursday with the aim of strengthening relations with Seychelles, the newly accredited Japanese ambassador said.

Horie told reporters that “until last year, my embassy in Nairobi has been in contact with our counterpart in Seychelles. But now we have an embassy here so it will be very easy and more efficient for us to work together for the same purposes.”

On his side, Faure highlighted the historical friendship between Japan and Seychelles, an archipelago in the western Indian Ocean.

He said that since the establishment of diplomatic relations in 1976 “we have developed strong bonds of friendship and have enhanced collaboration at both bilateral and multilateral levels."

During their discussion, Faure and Jorie talked about future plans and collaboration in the areas of the Blue Economy, maritime security, trade, tourism and investment.

Japan is already assisting Seychelles through a $7 million grant signed between the two countries last month.

The grant will fund projects aimed at improving maritime security. These include the reconstruction of the Anti-Narcotics Bureau headquarters at Perseverance, a man-made island, specialised equipment and high-speed patrol boats for the maritime police unit and a facility for the storage of marine vessels confiscated as exhibits during operations also falls under the grant.

Building the capacity of the police force in Seychelles will also be funded under the grant.