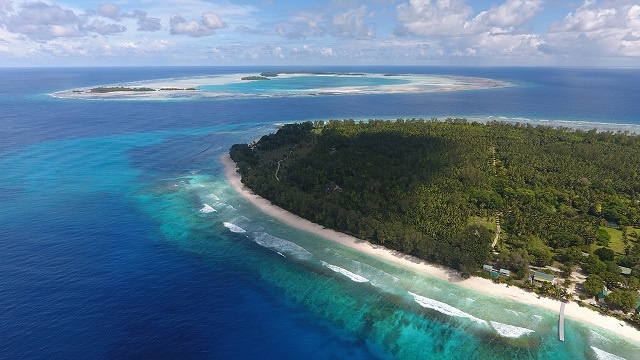 D'Arros island received a zone one designation and a zone two designation was assigned to St Joseph Atoll. (Michael Scholl)

(Seychelles News Agency) - Waters surrounding two outer islands of Seychelles have been designated as marine protected areas to safeguard the ecological value and biodiversity within the territories.

As part of the Seychelles' Marine Spatial Plan Initiative, a government-led initiative following the award-winning debt-for-nature swap, D'Arros island received a zone one designation, and a zone two designation was assigned to St Joseph Atoll.

The zone one and zone two designations of the water surrounding these two islands were finalised on March 26, when President Danny Faure, signed a legal document, under which Seychelles legally designated 30 percent of its territorial waters as marine protected areas. This comes 10 years ahead of international targets.

D'Arros Island and St Joseph Atoll, situated in the most remote reaches of the Amirantes region, are sanctuaries for vulnerable marine animals, including a large aggregation of manta rays and at least 514 fish species. St Joseph Atoll is the most important nursery area on the Amirantes Bank and a critical breeding ground for sharks, rays and turtles.

According to the Save Our Seas Foundation's project leader, Jeanne Mortimer, "the waters around St Joseph and D'Arros host some of the most intact marine ecosystems in the Western Indian Ocean region."

"Because the islands are so remote they have been protected from pollution, coastal development and overfishing for decades. This has made the ecosystem exceptionally resilient. Even after the most widespread and severe coral bleaching event in global history, the reefs around the islands are showing recovery," continued Mortimer.

The chief executive of Save Our Seas Foundation, James Lea, said that the organisation "has been actively engaged in the public review for these new protected areas in the Seychelles and is very pleased to welcome greater security for the marine habitats of this beautiful archipelago."

"The natural wonder of the Seychelles instilled a deep passion for the islands in our Founder and he has made protecting this wonder a core priority for the foundation," he added.

The Save Our Seas Foundation's D'Arros Research Centre has been active since 2012 and has hosted researchers from around the world.

More than 20 targeted research projects have been conducted at D'Arros and St Joseph in collaboration with numerous international institutions, and a new species of fish was even discovered.

The centre also supports six long-term programmes, including one of the longest-running turtle-monitoring projects in Seychelles, an archipelago in the western Indian Ocean. The project is being done by Seychellois turtle monitors since 2004 under the management of Mortimer.