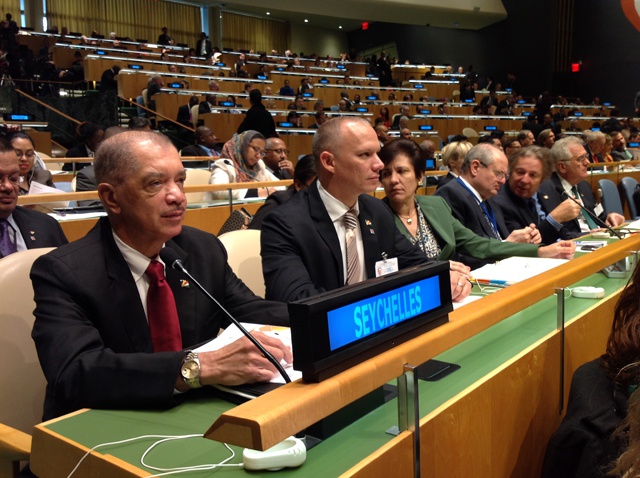 (Seychelles News Agency) - The Seychelles President James Michel, addressed the one day climate change summit at the United Nations Headquarters in New York on Tuesday, where he called for more action and less speeches to address climate change issues.

Four minutes, was the time allocated to each of the world leaders including Michel.

In a press statement, State House said the Seychellois head of state made an appeal on behalf of islanders globally, for world leaders to take decisive action now to reach an agreement to halt climate change and called on them not to ignore the truth about climate change.

“We have been given four minutes to address this plenary. It doesn’t matter. It is four minutes too many, I say! For now is not the time for speeches, but for action. We have heard it all before: the well-crafted speeches, the promises and the exhortations…… We have also heard the scientific facts, the complaints, the pleas for help from those on the front line: Small Island Developing States,” said Michel in the statement.

He also echoed the words which a Seychellois child recently wrote to the Secretary General of the United Nations Ban Ki Moon while calling on world leaders to not forget the children in this year of climate action.

“We are small……and to many we are insignificant ……..I am an islander and proud of it, for there is no other place I would wish to be my home … Our pleas are lost in all the noises made by the great of this world. While they count their profits, we are left unheard, forgotten …,” said Michel quoting the words that the child wrote to Ban.

Reiterating the statement he made at the UN SIDS Conference in Samoa at the beginning of this month Michel described climate change as “a crime against humanity.”

“Climate change – on our current, avid path – is a crime against humanity.  We are all guilty.  And we are all victims. But increasingly, SIDS themselves, are refusing to be victims,” said Michel.

He noted that SIDS such as Seychelles are already finding ways to tackle their uncertain situation and build their resilience when faced with climate change, hence mentioning the Indian Ocean archipelago’s efforts to finalise innovative debt for adaptation swaps to create marine protected areas that build climate resilience, while receiving debt reduction.

The need to have a Vulnerability Index for SIDS and the need for islands to take more ownership of their ‘Blue Economy’ were also highlighted.

Going forward Michel said an agreement must be reached in Paris next year. The Paris meeting that will take place in 2015 is aimed at finalizing a deal to slow rising greenhouse gas emissions.

“We call for the Paris agreement to be a protocol under the UNFCC. It must be an ambitious and legally binding agreement and applicable to all and must be adopted within the shortest possible timeframe. We must agree ambitious targets on the basis of common but differentiated responsibility. We call for the urgent operationalization of the Warsaw International Mechanism for loss and damage and for a permanent seat on the Executive Committee of the Mechanism to be allocated to SIDS. We must mobilise real adaption funding for all countries particularly taking into consideration the vulnerability of SIDS,” concluded Michel.