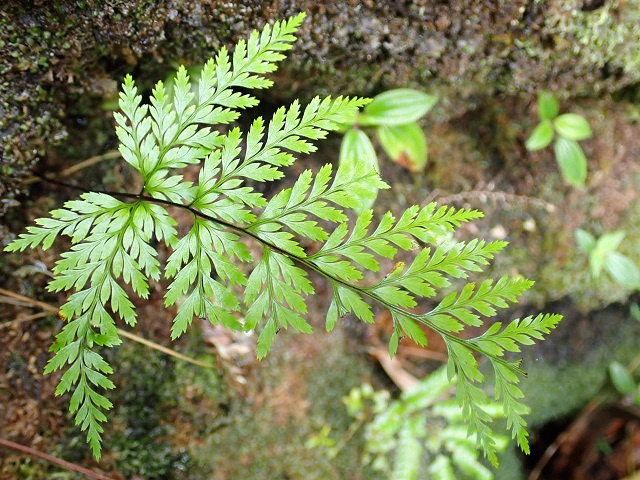 During the same competition, a fern - Pteris barklyae - on Mahe was rediscovered after the loss of the only known population a few years ago. (Bruno Senterre)

(Seychelles News Agency) - Over 5,000 new flora and fauna have been recorded and added to the Seychelles' biodiversity database through a photo competition organised by the Plant Conservation Action group.

The iNaturalist photo competition, which took place between mid-October and mid-December last year, was organised in an effort to promote citizen science and data collection in Seychelles. It also served as a way to upgrade the biodiversity database as well as the nation's plant gallery.

iNaturalist is a website hosting an online social network of people sharing biodiversity information to help each other learn about nature. It is also a crowdsourced species identification system and an organism occurrence recording tool.

Members of the Plant Conservation Action group described the competition as having "provided astonishing results, going far beyond any of our expectations" in a press release.

"Out of the total current number of iNaturalist species observations for plants and animals of Seychelles, amounting to 9,190, this photo competition contributed 5,073 new records - 55 percent - within just one month. This iNaturalist photo competition has contributed about 100 records of newly introduced plants, representing at least 57 different species. This is a very significant increase in our knowledge of the introduced ornamental flora," it read.

All participants had to take pictures of animals and plants they came across, and upload them to the Seychelles Bio Gallery. The competition had a scoring point system and at the end of the contest, and winners were participants who have accumulated the highest overall points.

A ranger at the Seychelles Island Foundation (SIF), Lee-Roy Estrale, contributed the most observations --1,721 -- during the competition, earning him the first place with a score of 1,853. The second and third place went to Gilberte Gendron and Maria Brioche who made 1,453 and 1,209 observations respectively.

Estrale told SNA that this was his first participation in such a competition and “it was a bit challenging as I didn't really know how to start but I started anyway, taking pictures of whatever I came across.”

He said that along the way, he learned how to do it properly and since he was on leave during that time he could move around a lot.

“So the photos are from different locations, but most were taken on Praslin. I went on the main road, on trails to find some rare plants, and into national parks. The species I discovered through the competition are mushrooms - I do not think that we have a large database about mushrooms in the country. We see them a lot but do not really know what they are. After posting a photo of a mushroom on the platform, a day or two later a person identifies the mushroom or the closest related family. It might be a mushroom that we do not know about yet,” added Estrale.

A rapid screening of the species allowed the Plant Conservation Action group to flag five of the observations as being potentially invasive and hence require more monitoring.

"Four of them are likely invaders of degraded or secondary habitats, but the last one has a high potential to affect pristine montane forest areas, where most of the Seychelles endemic flora concentrates. This potentially invasive species – the Cyathea cooperi – of high concern, is a very beautiful and easy growing tree fern. It is known to threaten native biodiversity in La Réunion, Mauritius and Hawaii," the group said in a press release.

During the same competition, a fern - Pteris barklyae - on Mahe was rediscovered after the loss of the only known population a few years ago.

These observations form part of the iNaturalist project Seychelles Bio Gallery. Through the collection of data, professionals and the conservation ecologist community of Seychelles can learn the exact geographic coordinates of threatened species, providing an important contribution to our knowledge on biodiversity distribution in Seychelles.

"We hope that this initiative does not stop after the excitement of the competition and that Seychellois iNaturalists will keep observing nature and help us build awareness on citizen science and the best tools to do it. Everybody can make discoveries and contribute to more sustainable management of our precious biodiversity," said the conservation group.