The ‘JOUEL’ of Seychelles turns 10. 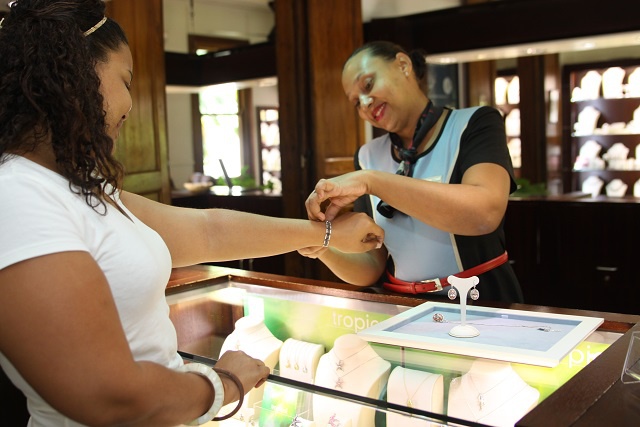 A customer receives the help of a JOUEL staff to get the perfect bracelet. The company employs 34 staff mostly Seychellois with only one Sri Lanka goldsmith. (Joe Laurence, Seychelles News Agency)

(Seychelles News Agency) - JOUEL is perhaps today one of the household names when we talk about jewelry in Seychelles, a small island nation in the Indian Ocean. It all started in 2004 with the opening of a small jewelry duty free boutique located at the archipelago’s international airport on the main island of Mahé. Known simply as Diamond SA in the beginning it was probably then a name associated to mostly the wealthy and high class travelers.

But 10 years on, branded in 2011 as JOUEL -with Diamond SA and Flawless being the company names, the business is said to be growing from strength to strength and the Jouel brand increasingly known amongst tourists and locals alike.

To mark this 10th anniversary, JOUEL diamonds and jewelry celebrated with a bash earlier this month, gathering its loyal customers and other diamond enthusiasts at a glittering reception held within the grounds of its main outlet,  the Kenwyn House, a traditional looking Creole style house- on Francis Rachel Street in the heart of the capital of Victoria.

The evening was followed by a jewelry fashion show depicting the seven JOUEL collections.

Present at the event, the Seychelles Tourism and Culture Minister, Alain St Ange described JOUEL as “an asset to the island’s tourism industry and the commercial world of Seychelles.

In 2005, the JOUEL base at Kenwyn House was renovated and was also declared a national monument that gave prestige to the home base. As a national heritage site, Kenwyn House gained a historical reputation.

At the event the company’s Managing Director, Rod Thorrington spoke of when JOUEL opened its doors in 2004 and how it has progressed and developed over the years in the diamond and jewelry business it is today and also how the company has engaged in corporate social responsibility projects.

Today, the company has expanded to 8 locations across the country not only on the main island of Mahé but even have a Duty Free shop at the Airport on Praslin, the second most populated island.

The JOUEL product are also available in some luxury hotels like the Ephelia Resort and Spa and Kempinski Hotel as well as on North Island and Fregate Island private which were recently revealed as the most expensive hotels in the world.

Over the years JOUEL has even ventured out in the neighboring island of Mauritius where it has three outlets, one in the capital Port-Louis at the Citadel, the others at Grand Baie in the Northwest coast of the island and at the Sir Seewoosagur Ramgoolam International airport.

The General Manager of JOUEL Seychelles Agnes Naidoo-Legras told SNA that the airport boutiques open 365 days a year for each and every departing flight which is seen as one of the greatest accomplishments of the company.

“With demand we’ve opened more shops. The most recent being the one at the Eden Plaza. From 2004 to 2012, every two years basically we’ve opened a new store, which means business, is good,” said Naidoo-Legras adding that Diamond SA plans to open a new shop in Seychelles soon.

From four workers when it started ten years ago, the company today employs thirty five people, the majority being Seychellois nationals.

The only foreigner- a Sri Lankan goldsmith was recently recruited to run its newly introduced Goldsmith service which ranges from sizing, setting, cleaning, polishing, re-plating, repair, solder design and manufacturing.

“We are proud to say we are a Seychellois based company,” pointed out Naidoo-Legras.

As part of its ongoing expansion plan the company recently introduced loose stones and mountings which customers can choose from and get the in-house goldsmith to mount for them to make into any piece of jewelry they want from rings, earrings and necklaces.

“You pay for your stone and your mounting that’s all. Its added value and it’s free. We are doing it mainly for our Seychellois clientele. It’s cheaper to mount your stone rather than buy an already made piece of jewelry,” explained Naidoo-Legras.

The JOUEL brand name, according to the company’s Managing Director Rod Thorrington is inspired by the beauty of Seychelles, hence why the fauna and flora collection depicting the islands beauty.

The tropical collection is one of the seven collections which make up the Jouel brand of products.

“The Tropical collection is exclusively based on the flora and fauna of Seychelles. Each design is unique to JOUEL and Seychelles,” said Naidoo-Legras.

Allure on the other hand is a collection which offers a diverse collection of salt water pearls from Japan, Indonesia to Tahiti set in gold with diamonds, while the Mystic collection offers a selection black and white diamonds mounted on gold.

The Splash collection consists of a range of semi-precious gemstones and fresh water pearls mounted on silver. These are mainly sapphire, ruby topaz and rose quartz. This collection is said to be a favorite amongst the local clients.

Said to be the birthstone for the month of April, diamonds make up the White Fire collection of JOUEL jewelry. This collection is the classic core jewelry range of diamonds from famous South Africa’s Cullinan Mine in Pretoria. The diamonds have been crafted with the trademarked, JOUEL’s South African ideal cut.

The Tanzanite Collection offers clients the rare gemstones which are uniquely found all the way on the slopes of Mount Kilimanjaro in Tanzania.

Most recently Jouel introduced the Young collection targeting a younger clientele. It features a collection of the underwater world such as the seahorse, star fish, shells, octopus and crabs.

These are mainly designed into charms which can be worn on bracelets or as pendants.

“Diamonds sell very well amongst our foreign clients. It’s obviously a bit more expensive. Seychellois buy more from our Splash collection which is the precious stones and pearls mounted on silver. Our products range from $6 (80 Seychelles rupees) to $84 thousand (1.1 million Seychelles rupees.)”

Also for the past two years, Diamond SA partnered with another well-known local jewelry brand the ‘Kreolor’ which has set up a shop in the Kenwyn House.

Engaging in community based projects

As part of its corporate social responsibility programme, JOUEL launched the Autism Advocacy Project in 2013, a project which Thorrington described as significant and momentous. The sponsorship for the project came to its end late last year.

The project in collaboration with the Seychelles Children’s Foundation, was aimed at advocating awareness about Autism and sensitize the Seychellois people about those individuals with Autism, particularly children. The project has now been handed over to an association grouping parent with autistic children.

Up to now Naidoo-Legras says Jouel has not yet identified another major cause to sponsor.  At the moment they are the official partner of the Seychelles Sports Fishing Club (SSFC). Under the two year contract Diamond SA sponsors a JOUEL gold pendant depicting the chosen fish theme for the particular fishing competition organized by SSFC.

“We support fishing, other events such as those organized by schools and partners with various organizations and NGO’s to support community based projects. We don’t give out financial support as such. Our sponsorship comes mostly in the form of a piece of our jewelry which they can put in their lottery or raffle,” explained Naidoo-Legras.

Since 2006 JOUEL has also been the sponsor of the Miss Seychelles crown which is made up of 18 carat white gold with diamond and sapphire.

“The crown is kept here at the Kenwyn House for safe keeping. The crown is worth over 10 thousand Euros,” declared Naidoo-Legras.

While the traditional looking Creole style house- Kenwyn House is home to some of the finest pieces of jewelry in Seychelles it is also a place that offers local artists the opportunity to showcase at the same time sell their artwork.

Every month an artist is invited to display its work.

Setting the (art) scene in Seychelles: Gallery opens in national monument building from 1855