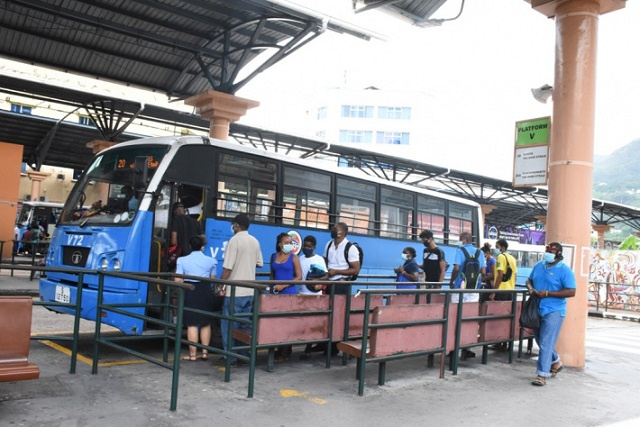 The fare increase is part of a restructuring process that SPTC is undergoing. (Seychelles Nation)

(Seychelles News Agency) - The public will pay SCR10 (cashless) or SCR12 (cash) when boarding a Seychelles Public Transport Corporation (SPTC) bus as of October 1, an increase from the current SCR7 fare.

The transport minister, Antony Derjacques, told a press conference on Thursday that the fare increase is part of a restructuring process that SPTC is undergoing.

"SPTC is going through a restructuring as there continues to be degradation in the finance of SPTC and as such, the government needs to continuously increase the funds that it injects into the company to support it. The government is looking at how to make SPTC more efficient, more modern and professional so as to provide a better service to the public. We also recognise that SPTC needs to be able to raise more money through its services so as to help itself," said Derjacques.

For this year, the total budget of the Corporation is SCR214 million ($15 million), with 47 million ($3.2 million) coming from taxpayer money.

Established in 1977, SPTC is the only public transportation service provider in Seychelles. It provides services operating on the islands of Mahe and Praslin. Before the COVID-19 pandemic, approximately 55,000 Seychellois and visitors were making use of the services on a daily basis.

The chief executive of SPTC, Patrick Vel, outlined that the reason why there is a difference in price when using a card or cash is to prevent leakage.

"One of the things that preoccupy us the most is leakage on board buses that have been estimated to stand at 10 percent. From January to August 2021, we estimate that SPTC has lost around SCR3 million through the leakage. Leakage happens when a passenger pays for the fare but does not take a ticket from the driver. Once a passenger does not hold a ticket, we cannot record this transaction," said Vel.

"We currently have around 50,000 cards in circulation, however, only around 40 percent of people are using their cards actively. We are also developing an app through which the public will be able to reload their cards without the need to come to the SPTC office," he continued.

SPTC is also working to reduce its operating costs which include staff benefits, insurance premiums, telecommunication bills among others, and so far, has managed to reduce expenses by SCR8 million.

Vel said that there is also the need to relook at the bus network. During off-peak hours, there are areas where the load is not enough and buses are operating with very few passengers. As of October 1, SPTC will introduce a new schedule and timetable to address these issues. SPTC is also looking at working with the private sector to better serve the public.

The minister also said that the as of October 1, spot fines for Minor Offences Fixed Penalties will increase from the current SCR100 or SCR200 to SCR1,000.

Additionally, new offences have been added to the decree. It will be an offence to transport a child aged 10 years or below on a motorbike, as well as have a child of the same age sit in the front passenger seat of a vehicle.

The principal secretary for transport, Patrick Andre, outlined that the latter will not apply when a driver places their baby in a car seat on the front passenger seat, ensuring that all security protocols are followed.