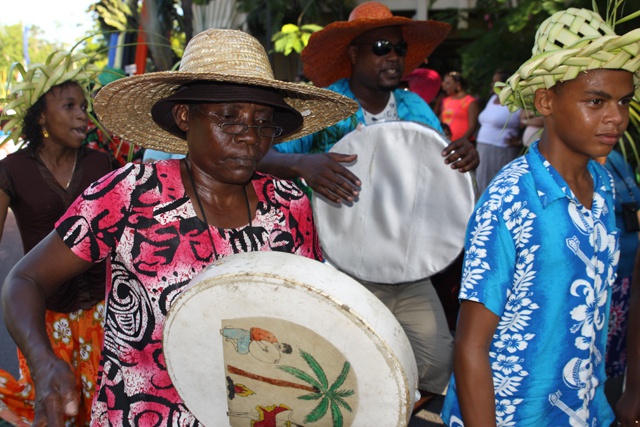 Most of the districts of the Seychelles main island of Mahe took part in this year's 'Laserenad'. (Joe Laurence, Seychelles News Agency)

(Seychelles News Agency) - Traditional games, clothing and music, the creole cuisine, the Seychelles flowers were some of the aspects of the creole heritage that manifested in the Seychelles capital of Victoria yesterday afternoon during the ‘Laserenad’ (Serenade).

This is an activity that has been forever present on the programme of activities organised during the annual Festival Kreol. It brings together participants ranging from children up to the elderly citizens that work together to showcase a chosen theme depicting and promoting the creole culture.

Defying a hot weather, some 22 groups hailing from most of the districts on the Seychelles main island of Mahé converged to the streets of Victoria at 4pm local time moving to the beat of traditional creole music as a large crowd including visitors to the islands lined up the streets.

The activity started at ‘Stad Popiler’ where the official opening of the Festival Kreol took place Friday evening with the participants dancing their way to the Clock Tower a popular landmark in Victoria, down Independence Avenue, heading to Francis Rachel Street and back to where it all started.

A group of elderly ladies from Anse Royale a district in south Mahé led the way proudly displaying the traditional clothing of Seychelles a long skirt and shirt known as "Zip and Kazak or Penwanr". This was a common apparel worn by the islanders until about four decades ago.

Takamaka district also in the south of Mahé had chosen to feature various aspects of Seychellois cuisine, including the grilled fish and breadfruit.

With the sea as its theme, Au Cap, another South Mahé district had its participants carrying replicas of various colourful tropical fish made of wood and fibreglass, pirogues -the canoe traditionally used for fishing as well as nets, bamboo fish traps and "Kapatia" a bag made from green coconut leaves.

A group from Belombre, in the northern part of Mahé, had all ladies bearing an umbrella, painted in various colours. As it happened, the umbrellas came in very handy and the ladies only had to act naturally, protecting themselves from the hot sun.

The sounds of the acoustic guitar also resonated in Victoria yesterday as a group of nine guitarists came together. The group was led by 64 year old Guy Marie, the lead guitarist of the ‘Amigos’, a country and western group playing at concerts, on average, twice yearly in Victoria.

"My colleagues and I, we are all veterans and we had envisaged this festival as an occasion to showcase our skills," Marie told SNA.

All these performances were greatly appreciated by those who had come down to Victoria yesterday.

Jeanne Alcindor, a 72 year old lady from Glacis in the north of Mahé told SNA that she makes a special effort to come down to the capital every year for this activity.

This was also the case for Belinda Isnard, a 35 year old mother of three girls and an 18month old boy, Francesco.

"This is about the only Festival event I am coming to see for myself with my children. The others I might see on television," she told SNA.

Tourists on holiday in the Indian Ocean archipelago were also enjoying themselves discovering the creole culture.

Jarek and Magda, a couple from Poland as well as Philippe and Beate from Germany preferred the children dressed in green and wearing hats made from coconut leaves.

At the close of the serenade, they were each offered a hat as a souvenir of the Festival Kreol.

For all of them, it is their first vacation in Seychelles and they said that they are having a great time.

Hats made from coconut leaves were quite popular amongst the participants as they were also sported by staff of a new hotel that will be opening its doors soon, the Avani Hotel that will be located where it formerly used to be Le Meridien Barbarons Hotel, on Mahé’s west coast.

The hotel is presently still being renovated ahead of its opening scheduled for December, but Sania Francourt, Avani’s Public Relation’s Manager told SNA that they decided to have a float "to publicize the renovated hotel and new name at this festival."

Francourt said the 30 hats needed were all made within hours by a man from Barbarons and had coast $2 each.

Apart from the Seychellois groups from all over the main island of Mahe, different groups from other creole nations in the Indian Ocean region, that is Mauritius, Rodrigues and Reunion islands were also present.

"Comperes Creole" from Reunion Island led by Jean-Max and Laeticea were showcasing the "Maloya" the traditional dance of the he French overseas department in the Indian Ocean.

Mauritius’ 'Bwa Maron' and the group from Rodrigues that performed at the Festival Kreol’s opening ceremony the previous evening were producing the Sega beat with their famous "ravann" a flat drum, accordion and triangle.

'Laserenad' was followed by a 'Pipili' where different groups danced to the beat of Seychelles traditional music.

The second day of the Festival Kreol yesterday ended with more entertainment in Victoria where thousands of fans converged to Stad Popiler for the much anticipated show by Kassav. The French – Caribbean Zouk Band was performing live for the Seychellois public, for the first time in 23 years.

SNA presents a collection of photos taken by Joe Laurence of the 'Laserenad' and 'Pipili' in the Seychelles capital of Victoria on Saturday.