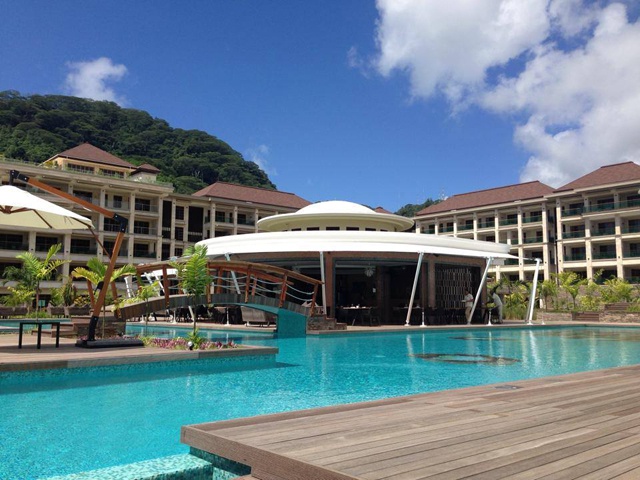 Partial view of 5-star hotel Savoy Resort and Spa, an example of a tourism related business in Seychelles. Tourism alongside fishing and the financial services are some of the sectors attracting a large volume of businesses in the Indian Ocean archipelago. (Savoy, facebook page)

A change in the way the scores are calculated meant that the latest scores could not be compared to the previous year’s, which led to the World Bank re-calculating all the scores from the 2014 Doing Business report for comparison purposes.

Although the Seychelles was in 80th place last year, the recalculations placed the tiny Indian Ocean archipelago with its population of 90,000 further down in 87th place, with a total score of 62.05 out of 100.

First in the region is the neighbouring Indian Ocean island of Mauritius, which is ranked 28th globally, while South Africa (43rd) and Rwanda (46th) are second and third respectively in the region.

The 2015 Doing Business Report once again ranks Singapore in first position as the country with the most favourable business environment in the world, unchanged from last year’s position.

The annual Doing Business report, now in its 12th edition, measures the ease of doing business based on the regulations and corresponding red tape surrounding starting a business and trading in each of the 189 countries it assesses.

Getting credit, however, was one of the three areas where Seychelles once again underperformed, ranking only 171st globally compared to 169th in 2014. The archipelago also ranked poorly in “Starting a Business” (127th from 119th in 2014) and “Getting Electricity” (130th from 131st in 2014).

Areas where Seychelles has witnessed some progress include “Resolving Insolvencies” (61st compared to 105 in 2014) and “Enforcing Contracts” (103rd compared to 107th in 2014).

The change in methodology is equally unlikely to please major economies such as China, which only ranked 90th on the scale, as well as Brazil and India, placing 120th and 142nd respectively.

This year’s report adopts the recommendation of a 2013 review led by former South African Finance Minister Trevor Manuel, which suggested moving away from ranking countries using an aggregate of their scores.

The bank has now implemented a “Distance to Frontier (DTF)” calculation method which measures a country’s progress against a best practice yardstick.

The World Bank says this method delivers more encouraging results – 80 percent of the countries listed improved their overall DTF scores over the past year.

The Seychelles Minister for Finance, Trade and Investment has expressed disappointment with this year’s ranking, primarily because in his view “the latest ranking fails to take into account the important progress that Seychelles has achieved in many areas over the past year.”

“Despite the improvement of two places, we are obviously overall disappointed that yet another report by a major international organization has failed to capture the reality on the ground,” said Laporte in a press release issued by the ministry.

“This past year our staff have worked very hard and closely with the other government agencies and World Bank's focal point at Headquarters to get Seychelles' information properly captured and updated, and obviously this ranking has failed to reflect this.”

The Credit Information System managed by the central bank of Seychelles is one example noted by the Finance Minister which he says has been “widely acknowledged by various World Bank missions as an important success in strengthening Seychelles' financial sector, and yet this year's report states Seychelles as having no such system.”

Laporte believes nevertheless that Seychelles is on the right track given reforms which are in the process of being implemented; reforms he says will help the country to gradually to rise up the rankings.

Mystery of the missing data

Ziyaad Ebrahim, a senior official in the Ministry of Finance, Trade and Investment, said that the World Bank sends questionnaires to the government and the private sector and then matches the two together to provide a balanced view of the ease of doing business.

When the government receives their questionnaire, it is sent to all the relevant ministries and agencies where they are completed, sent back to the Ministry of Finance, which compiles the data and submits it to the World Bank.

But according to Ebrahim, not all the data that was sent back to the World Bank was used in this year’s report.

“This time we sent all the gathered information to the World Bank in time - before the deadline, which was April 25 - but somehow not all the data was incorporated in the report, we have seen that some information included in the report dates back to 2007, when we have provided the latest,” he said.

“We are now trying to find out from the World Bank what happened and why the information we provided was not included in the latest Doing Business Report.” he said

The Chief Executive Officer of the Seychelles Investment Board (SIB) said it was clear that the World Bank correspondent was not up to date with changes happening in the Seychelles.

He cited examples where access to credit had been improved, such as loan schemes with attractive interest rates for small and medium-sized businesses. He added that there had also been a measurable improvement in both the registration of businesses and the time taken to get a new electricity connection.

Simeon nevertheless acknowledged that there is work to be done to if Seychelles wants to further improve its ranking.

“To make sure we are comparable to Rwanda and Mauritius and others whose rankings are seen as success stories we should have an approach where all agencies working with businesses come together and look at the ease of business as an achievable target,” he told SNA. “It’s true, some agencies are not taking this seriously and not delivering in a timely manner and this portrays badly to the clients requiring their services.”

The chairman of the Seychelles Chamber of Commerce and Industry, Marco Francis, has told SNA that the Doing Business report, like the World Economic Forum’s report on Global Competitiveness, showed the red tape involved in starting a business was getting increasingly difficult to navigate.

“The report released today shows that we are down 8 positions from 119 to 127 for ‘Starting a Business’ – this shows that reforms that have been done look good on paper but the reality on the ground is different,” he said.

However, Francis acknowledged the work the Attorney General’s office had done to reform contract and insolvency law, leading to an improvement of Seychelles’ scores in related areas.

“SCCI’s position is that policies done in isolation do not work for a small economy like Seychelles, we need to have policies in consultation with all sectors and we need to have a policy that has an overview of the reality on the ground,” he said, adding that the private sector wanted to help create better policies to create economic and social prosperity for the country.

Francis also said that Mauritius, which ranked 28th globally, has a consultation framework in place where policy-makers are equal partners with the private sector.

“In Seychelles we have started this, like tourism we are sitting together in the monthly meeting chaired by the Vice President,” he continued. “We are being frank with each other and highlighting the problems and from the past four meetings we have seen some issues get resolved very fast. This is a formula Mauritius has had for a long time which we are starting.”

He added that the SCCI had already requested similar forums to be implemented for production, financial services and the blue economy.

“We have started with tourism, we needed to start somewhere we need to fix the main pillar, yes, and we are asking the Vice President to take the lead to address the other sectors as well,” he said. “We have a lot to do. We have started and we need to continue to have a better rating, we need to ensure the lives of the businessmen in Seychelles become easier and not more difficult.”