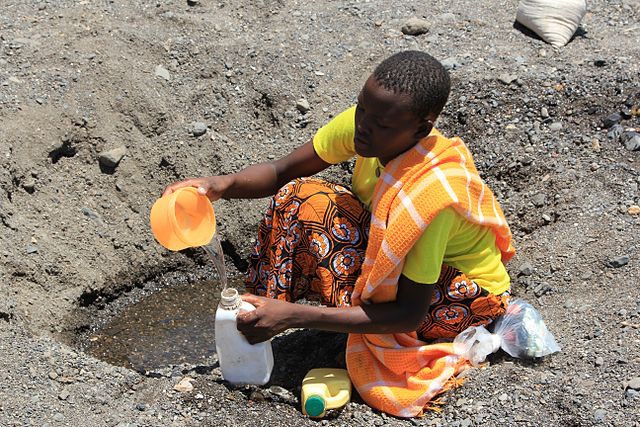 A woman scoops water in a dry riverbed near Kataboi village in remote Turkana in northern Kenya. (Wikimedia) Photo License: (CC BY 2.0)

(Seychelles News Agency) - The former president of the Seychelles, James Mancham, has called on United Nations Secretary-General Ban Ki-Moon for the creation of a UN organisation that would seek resolutions for the water crisis facing the world.

The former president, who became the first democratically elected leader of the 115-island archipelago of the Seychelles after it gained independence from the British in June 1976, was attending the Economist’s World Water Summit in London last week, according to a press statement issued by his office.

The need for a focus on ‘hydro-diplomacy’ to ease tensions over rivers and lakes shared by adjoining nations was also highlighted by the UN’s Deputy Secretary-General, Jan Eliasson, who told the assembled delegates that the world was experiencing a “surge of water related crises”.

Climate change as well as growing populations and more development are to blame for the lack of fresh water supplies around the world. Eliasson is now concerned at the prospects of wars being fought for the control of fresh water sources.

He cited current examples of rising diplomatic rows, such as Egypt’s dispute with Ethiopia over the water from the Nile River, the Israeli-Palestinian dispute over the equitable distribution of water to Palestinian territories, and the dam planned by Tajikistan’s creating heightening tensions with Uzbekistan.

Eliasson said in his keynote address that demand for water was projected to grow more than 40 percent by 2050.

“An estimated 1.8 billion people will soon live in countries or regions with water scarcity,” said the Deputy Secretary-General.

Around 80 percent of the world’s waste water is discharged untreated into oceans, rivers and lakes. Nearly 2 million children under the age of five die every year due to a lack of clean water and decent sanitation. Eliasson stressed that in 2014 a billion people in 22 countries still defecate in the open.

The good news is that thanks to policies and investments brought about by the Millennium Development Goals (MDGs), around two billion people around the world have recently gained access to improved water sources.

“Still, let us remember that 750 million people on Thursday do not have access to safe drinking water,” said Eliasson.

UN ‘must take the lead’

Speaking to the panelists, Mancham expressed his opinion that the United Nations must take the lead to tackle the water crisis in all its dimensions, “adding that if the United Nations could have a specific organisation dedicated to World Health and World Tourism, there was now a necessity to think about the World Water Organisation,” read the statement.

The UN deputy Secretary General responded that the idea deserved due consideration.

“Whilst the United Nations has so far done a good work at horizontal level with respect to the water problem, the urgency of tackling the issue and the menace of water shortage is such that the creation of a specific organisation could be justified,” he told the delegates.

Not a new problem for Seychelles

The islands of the Seychelles, situated some 1,500 km off the eastern coast of Africa, are no stranger to water shortages. The population of 90,000 people must deal with water restrictions annually during the dry season from May until September.

Changing weather patterns over the years have seen the dry seasons lasting longer, and combined with an increase in the number of households and development, notably in tourism, has seen the demand for fresh water sky-rocket.

Twelve years ago the country’s Public Utilities Corporation (PUC) built desalination plants to turn sea water into potable drinking water, but the issue of water reservoirs and storage continues to be a problem.

The government now plans to raise the level of the main reservoir in the mountainous La Gogue area, increasing its current capacity of one million cubic metres by 60 percent. Work on raising the dam is expected to start next year will take three years to complete.

Extension of Seychelles' La Gogue dam expected to be completed by end of year, official says