A giant panda case study for a giant tortoise in need of extra protection: Seychelles botanical gardens to learn from China 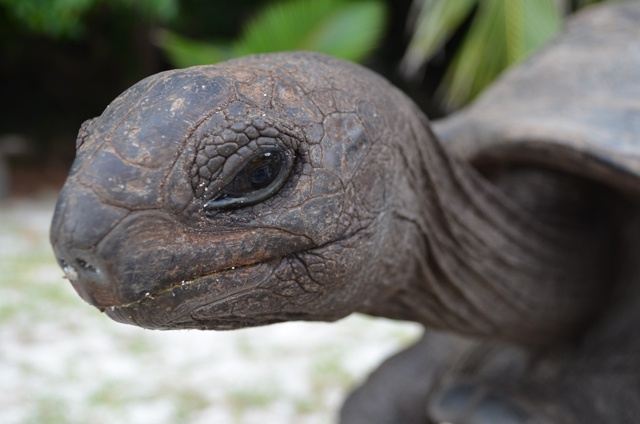 Giant tortoises from the Seychelles islands might become a unique way for the islanders to connect with the world. (Nina Bogosavljev,Seychelles News Agency)

(Seychelles News Agency) - Giant tortoises from the Seychelles have become more popular attractions in zoos around the world, where they sometimes struggle to live in colder climates. They have been given homes in Bristol Zoo in the UK, the Bronx Zoo in the US, and the oldest one in the world (also oldest living animal) is on the island of St. Helena in the Atlantic Ocean.

In October this year Seychelles loaned a pair of giant Aldabra tortoises to Guangzhou Zoo in in the Guangdong province in southern China.

Recently Seychelles botanists agreed to work with Chinese experts to use giant tortoises from the Indian Ocean islands as a way to connect with the world, in the same way that pandas have become a symbol of Chinese conservation and tourism.

“The Chinese have been able to protect and preserve their pandas which are very important for them. They have done this very well and we want to learn from them and put in place measures to protect our giant tortoises which are equivalent to China’s pandas in terms of importance”, said Brioche in an article published by the daily newspaper ‘Seychelles Nation’.

Seychelles also hopes to benefit from the research programmes of the Beijing Botanical Gardens through the agreement signed.

“The MoU [Memorandum of Understanding] encompasses research on endemic plants found in Seychelles and the genetics of different species,” said Brioche.

With an expanse of 564 thousand square metres, the Beijing Botanical Gardens, situated in the west of the city of Beijing, is one of nine gardens in China where plants are grown and displayed for research, conservation and educational purposes. There are over three thousand specimens of plant species which includes many famous and rare plant specimens.

As part of the agreement the two botanical gardens will also provide training for their staff.

Seychelles is home to largest population of giant tortoises

Classed as ‘vulnerable’ on the red list of threatened species of the International Union of Conservation (IUCN), the Aldabra Giant Tortoise is considered to be one of the largest species of tortoise and also the longest living animals, with an estimated 150,000 left in the wild on Aldabra atoll, a UNESCO World Heritage site.

On Mahe, Praslin and La Digue, the main islands of the archipelago, these gentle creatures are also found in the gardens of homes as a treasured pet.

They are protected by the Seychelles laws and also features on the national currencies and emblems of the country, which has a population of around 90,000 people.

The giant panda on the other hand has an estimated population of less than 2,000 and is listed as an endangered species by IUCN due to loss of habitat, lack of food especially bamboos and illegal trade.

This has prompted China to establish several programmes in order to protect the species; something which the National Botanical Gardens Foundation says Seychelles can learn from.

“China does not gift their pandas, they lease them and this is something we too can do to help connect Seychelles with the world,” Brioche told Seychelles Nation whilst referring to a recent loan of a pair of giant tortoises to the Guangzhou Zoo.

With Seychelles hoping to lure more tourists from China, having already welcomed more than 12 thousand Chinese tourists this year, the NBGF, is also anticipating to showcase local products at the Beijing Expo.

“This will be very good for tourism for example, as Chinese tourists will have an idea of what they can expect to see when they come on holiday to Seychelles,” said Brioche.

NBGF also have similar agreements with Suncheon city in South Korea and Thailand. Earlier this year, a Thai garden was inaugurated with over 10,000 varieties of spices which were imported as part of the new attraction in the Seychelles botanical garden.

Although smaller in size than the one in Beijing, the Seychelles botanical gardens, which are situated one kilometre from the capital of Victoria, have more than a century of experience in plant conservation, with a collection of more than 500 native and exotic plants.

A small fee of 100 Seychelles rupees is required to enter the garden, equivalent of 7 dollars.

Attractions amongst the flowery bushes and shrubs and gigantic palms of the gardens, including the palm with the largest nut, the coco-de-mer, and an enclosed area for over a dozen of giant tortoises collected from various islands of the island country.