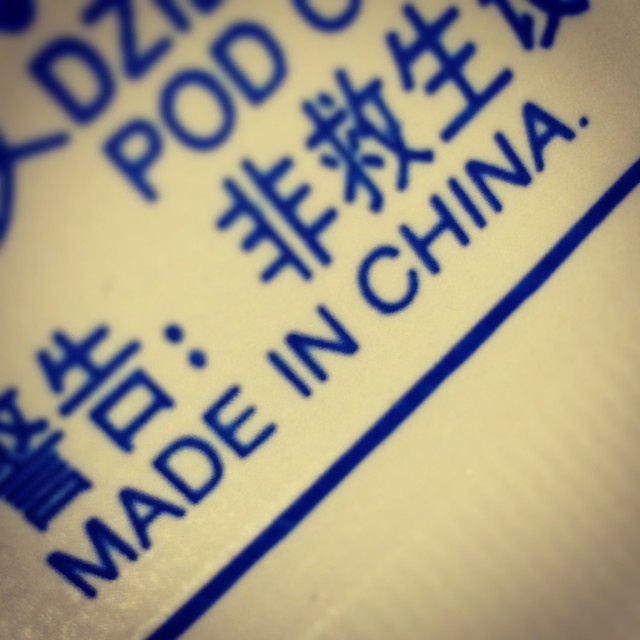 “Made in China” labels. In 2013 Seychelles imported 21 million US dollars worth of goods from China, says the National Bureau of Statistics. Seychelles depends heavily on food imports from neighbouring African and Asian countries, with up to 90% of goods consumed coming by air and sea cargo. ( Martin Abegglen, Flickr  ) Photo License: CC-BY-SA-2.0

(Seychelles News Agency) - Seychelles is the “ideal location for China to establish its hub as it explores the potential of Africa”, says the Seychelles Chamber of Commerce and Industry (SCCI).

The chairperson of the SCCI Marco Francis spoke to SNA following a visit last week to China as part of a delegation from the Indian Ocean islands for the Seychelles tourism ministry’s road show in China.

During the visit, Francis also met with the Chinese Chamber of Commerce to convince its members that the Seychelles are an ideal base for regional commerce.

“Seychelles is a member of SADC [Southern African Development Community] and COMESA [Common Market for Eastern and Southern Africa], and as such we enjoy certain benefits which the Chinese traders could also tap into if they were to use us as a hub for their trade with the continent,” said Francis.

He also highlighted the traditional and long standing relations that Seychelles and China have as a basis “for solid trade”, as well as the “political stability, social stability and a healthy environment”, that makes smooth trading possible between the two countries.

“Also the Chinese side could benefit from the various tax incentives which exist here....We availed of the opportunity to explore possible avenues of cooperation between us and we also invited them to participate in our Expo next year”, stated Francis to SNA.

The SCCI will be organising an international expo in May 2015, similar to one held in June this year with Mauritius. Apart from China, delegations from Egypt and Oman have been invited to participate.

Seychelles depends heavily on food imports from neighbouring African and Asian countries, with up to 90% of goods consumed coming by air and sea cargo.

According to the trade division in the Seychelles Ministry of Finance, Trade and Investment, the main types of imports from China were motor vehicles, pneumatic tyres, plywood, freezers, steel structures, apples, garlic,carrots, mobile phones and their parts, fenders and DVD players.

The largest volume of imports to Seychelles were from the UAE, followed by Spain, France, India, South Africa, Italy, Singapore, Mauritius, the United Kingdom, Thailand and China.

Tourism is another big attraction

China is now considered as the 5th largest tourist source market for the Seychelles with more than 12 thousand Chinese tourists coming this year, compared to 7,714 last year , but the SCCI says there is scope for more. Last year a total of 230,000 visitors came to the Seychelles.

This year, with arrivals from Europe remaining depressed, Chinese tourists have never been more vital to the survival of the Seychelles economy, which, being a small island developing state, earns its main source of foreign exchange from the tourism sector.

“Each year, China sees 150 million members of it’s population travelling abroad and this is set to go up to 500 000 within the next decade, so we must find the means to tap into this huge market and create our own niche”, said Francis.

Already three Chinese tour operators including the Qunar and Caissa Touristic, both listed on the American stock exchange Nasdaq, have agreed to heighten their promotion of Seychelles on the Chinese market especially with a growing interest for direct chartered flights between Seychelles and China.

Francis says the industry of Seychelles will support such proposal as this will give a big boost to the tourism industry.

‘It is therefore important that we support their proposal once they submit to government ....Even now without non-stop flights we are likely to see an increase of 100% from 7000 to 14000 visitors from China this year. So if we give them what they want, we can only improve and win,” he said.

150 years of trading with China

The Seychelles islands have a population of 90,000 people, who are a Creole nation made up of descendants of French, British, African, Indian and Chinese settlers. The islands were uninhabited prior to their discovery; the first discovery was in 1502 by Portuguese explorer, Vasco Da Gama.

The National Archives have records of the first Chinese arrival in the Seychelles in 1863 aboard a merchant ship. They were followed by a group of 23 more Chinese immigrants from Mauritius in 1886.

Today Seychellois of Chinese origin form part of a large community, many of whom are merchants and have long established trading links with China.

Investment » Be a reporter: Write and send your article » Subscribe for news alert
Tags: Marco Francis, Seychelles Chamber of Commerce and Industry, Ministry of Finance, Trade and Investment, China, Ministry of tourism and culture, trade