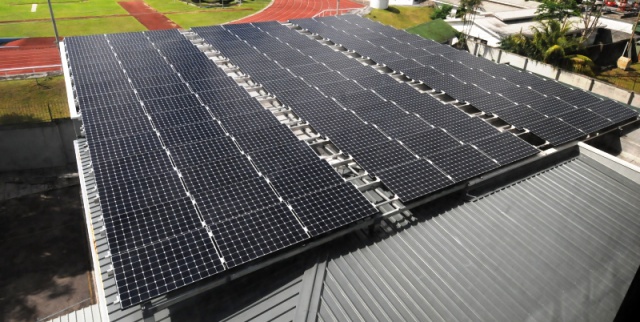 (Seychelles News Agency) - A new rebate scheme has been launched in Seychelles to make the purchasing of photovoltaic panels more affordable to the commercial sector. This is a follow-up to the financial incentive scheme launched earlier this year to make investment in renewable energy technology more attractive for residential households.

According to a report in the Seychelles Nation, the scheme was launched last week by the Minister of Finance, Trade and Investment, Pierre Laporte, at the Coco D’Or hotel in Beau Vallon, in the north of Mahé.

The project is a collaboration between the Seychelles government, the United Nations Development Programme (UNDP) and the Global Environment Facility (GEF), which co-fund sustainable development projects in partnership with the government.

In addition to the rebate scheme, the Ministry of Finance, Trade and Investment, together with commercial banks and the Seychelles Energy Commission, launched the Seychelles Energy Efficiency and Renewable Energy Programme (SEEREP) last year, which allows purchasers of renewable energy products and technologies to secure finance at a low 5 percent interest.

Any un-used electricity generated by photovoltaic units during the day can now be sold back into the national power grid to the Public Utility Company (PUC), enabling residents and businesses alike to earn additional income from their investment in renewable energy, lower their utility bills and reduce demand on the national power network.

A subsidy for a good cause

At the launch, Minister Laporte expressed concern at the rising cost of electricity in Seychelles and added that the commercial sector needed help to be able to adopt renewable energy technologies to counter the negative effect of high energy prices on the economy.

Although the IMF-assisted economic reform programme the Seychelles government has undergone for the past six years is against government subsidies in general, Minister Laporte explained that subsidies which were needed to move the country forward would be implemented where necessary, adding that his ministry would provide policy support as much as it was able.

Looking back at the implementation of the residential PV rebate scheme, the project manager of the PV rebate project, Dominic Rassool, said when the scheme was launched last year, it soon became apparent that the capital expenditure was simply out of reach for some people.

After receiving feedback on the cost factor from the public, the programme coordination unit decided to reduce payback on the PV units to under five years.

The Indian Ocean archipelago of the Seychelles is almost completely dependent on fossil fuels, which power large generators around the main inhabited islands of Mahé, Praslin and La Digue.

The cost of importing fuel to the remote small island state is high, meaning that energy prices, undergoing the process of having government subsidies removed, is expected to rise significantly over the next five years to begin to reflect true market prices.

Rising energy costs for businesses and the impact this will have on inflation and the growth of the private sector as a whole, has meant the country’s policy-makers must now seriously look at viable renewable energy sources.

The Seychelles currently has a wind farm of eight turbines, donated by UAE-based energy company Masdar, which each generate about 750kW. In total, this is equivalent to around 2.2% of Seychelles’ current electricity requirements, providing power to around 2,000 homes.

The government aims to generate 20% of its energy requirements from renewable sources by 2020, which is now a mere five years away.

The main factor preventing people from investing in renewable energy projects has been the high initial investment, and even though all taxes were removed on the importation of photovoltaic equipment, the government has also had to go through the lengthy process of adapting its legal and legislative framework to make it easier for households and businesses to generate their own electricity.

Two large-scale photovoltaic systems have been installed for commercial enterprises on the main island of Mahé this year: a 143 Kilowatt peak (KWp), 435-panel system which has been placed on the roof of the Central Bank of Seychelles (CBS) and a slightly smaller system at the Amalgamated Tobacco Company at Anse Des Genêts.

Policy-makers will now have to remain focused on making solar energy, such as photovoltaic rooftop systems, solar geysers and solar lighting, more attractive in order to meet its 2020 target.