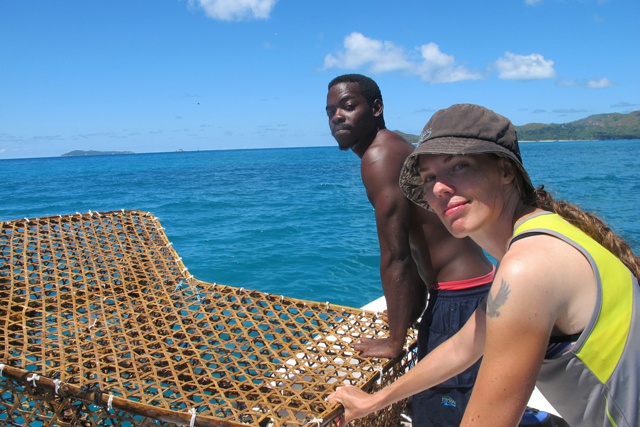 (Seychelles News Agency) - Seychelles’ existing Marine Protected Areas (MPAs) are currently not extensive enough to protect fish vital to the biodiversity of the area and the coral reefs which support them.

This is the view of a fish researcher working for environmental organisation Nature Seychelles, Dr Tove Jorgensen, who has highlighted the need to protect the spawning grounds of two species of rabbitfish, a herbivorous fish often caught and salted for local consumption in the Indian Ocean archipelago of 90,000 inhabitants.

Dr Jorgensen was delivering the findings of fish-tagging research she conducted to study spawning aggregations of the fish. Rabbitfish and their herbivorous relatives, the parrotfish, are seen by many conservation experts as vital to the health of coral reefs throughout the world, as the fish graze on fast-growing algae which without them, can overrun coral reefs and destroy them completely.

According to a press statement issued by Nature Seychelles, fishing for rabbitfish, popularly known as kordonnyen among local fishermen, in the waters of the Seychelles’ inner granitic islands may one day be the stuff of distant memories.

“When I was growing up, I remember a lot of fishermen fishing outside Port Victoria, near what we used to call the ‘Far’ – the Victoria Harbour Light House,” recalled the CEO of Nature Seychelles, Dr Nirmal Shah at the opening of the workshop.

“In those days there were spawning aggregations of a species of groupers called “vyey davril” every April. Fishermen knew to fish there for a big catch. This spawning site vanished even before the land reclamation because of overfishing.”

Although Seychelles has protected over 50 percent of the archipelago’s land territory, one of the largest proportions in the world, less than two percent of its Economic Exclusive Zone is currently demarcated in MPAs.

Many of the marine reserves have inadequate demarcation and warning signs and infrequent patrols to ensure enforcement of the ‘no-take’ fishing regulations, meaning that much work is still left to be done to ensure the protection of these pristine areas for future generations.

The Seychelles Ministry of Environment and Energy announced in June that it was in the process of drawing up a Marine Spatial Plan (MSP) which would clearly demarcate areas designated for fishing, recreation, oil exploration and tapping as well as harnessing of renewable energy source.

Dr Jorgensen’s fish-tagging study was conducted on the Cousin Island Special Reserve, found just km off the second largest inhabited island of Praslin, and a spawning site three kilometres away from Cousin known as ‘Dividi’.

The project, which was funded by the Global Environment Facility (GEF) and United Nations Development Program (UNDP), focused on acoustic and conventional fish tagging as well as the evaluation of telemetry equipment. Some components of the study also included analysis of the fishes’ utilisation of their habitat, fish sampling and indexing, and fish and substrate surveys around Cousin and Dividi.

“I would say the project has been a great success,” Dr Jorgensen said. “We now know much more about herbivore fish behavior and that for some species, small marine reserves are not sufficient to protect them. They need additional protection. The project has also shown clear links between how fish movement can affect coral reef management.”

In the year and a half that Dr Jorgensen spent studying the fish, she found that forktail rabbitfish (Siganus argenteus) appear to be sufficiently protected at Cousin Island Special Reserve, whereas the species known as shoemaker spinefoot (Siganus sutor) are vulnerable as they leave the marine reserve regularly during spawning.

She also noted that the juvenile rabbitfish were not legally protected against fishing.

Dr Jorgensen recommended that Cousin’s marine reserve should be extended by 100 percent on all sides. She also advocated greater protection of the rabbitfishes’ spawning sites as well as the legal protection of juvenile fish habitats and mangrove habitats against future land reclamation projects.

As an organisation that has worked for many years to educate and speak on behalf of local fishermen whose livelihoods depend on sustainable fish populations, Dr Jorgensen stressed that the Praslin Fishing Authority should never be exclude from policy-making discussions and decisions.

“The Seychelles is very dependent on the ocean, both for fishing and tourism and it is therefore very important to safeguard these resources,” she concluded.