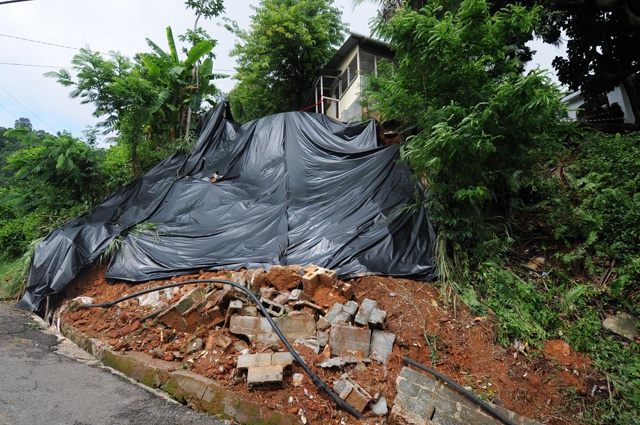 Hanging in the balance - a house clings precariously to a hilltop after the embankment below collapsed following heavy rains last weekend in Seychelles (Patrick Joubert, Seychelles News Agency)

(Seychelles News Agency) - Disaster relief operations in flood-stricken areas of Seychelles are well underway, and reported cases of landslides and flooding have now been described as ‘stable’ by officials.

Severe weather last weekend caused flooding and landslides in areas surrounding the capital of Victoria on the main inhabited island of Mahé, as well as some parts of the second and third largest islands of Praslin and La Digue respectively.

However, the Division of Disaster Risk Management (DRDM) is still on high alert for January as the tropical Indian Ocean archipelago of 115 islands usually experiences its heaviest rainfall between the months of December and January, known locally as the north-west monsoon.

Seychelles President James Michel has now called on all 90,000 inhabitants of the small island state to develop a “culture of preparedness” to help prevent disasters before they occur, a sentiment echoed by the director-general of the DRDM, Paul Labaleine.

Even though the weather has cleared somewhat in recent days, Labaleine warned against complacency.

“It’s January, the peak of the rainy season and we are only in the first week of January now,” Labaleine told SNA. “We have the whole rest of the month to go, so I would advise people to continue to take precautions.”

“Like the president has said, let us be in a state of preparedness, and for those people who live by the rivers and vulnerable places like that, they need to take extra precautions to protect their properties and families.”

Labaleine advised all landowners to be proactive instead of reactive by identifying potential problems with drainage before flooding occurs.

“Although we are there to help, we can only help when things have already happened and the property has been affected. They are the ones who we will assist, yes, but by then the damage has already been done.”

President Michel yesterday thanked all government agencies and departments as well as other organisations involved in clean-up efforts.

“The worst case scenario has been averted,” he said in a statement. “I would like to thank everyone who has contributed to mitigate the effects of the heavy rains, and helped to ensure homes were protected and those people affected were moved to safety.”

The president added that the culture of preparedness that had been developed since the flooding caused by tropical storm Felleng in January 2013 had made Seychellois “more resilient”.

He urged the people of Seychelles to remain vigilant as the forces of nature could not be controlled.

Speaking to SNA this morning, Labaleine said that some of the reconstruction work needed was still at the technical assistance and design stage, but noted that at the moment all disaster-hit areas were secure.

Where domestic houses have been affected, the Minister of Social Affairs, Community Development and Sports, Vincent Meriton, has instructed all district administrators to visit all the household cases provide any necessary support and assistance to homeowners.

“For government infrastructures, all agencies that have mandate to assist, for example transport, community development and MLUH, they have already taken on board their tasks, and they are doing their necessary preparations to go out there and do what is necessary,” added Labaleine.

Families hanging in the balance

After it was reported that a large boulder in the Victorian suburb of Foret Noire was slipping down the side of a hill, threatening up to five houses below, Labaleine today confirmed that the residences were still at risk.

“This boulder is being monitored, because it is a massive one, and the location is quite complicated because there are houses everywhere, so we need to move people away,” explained Labaleine. “There is a house just under it, and that the Ministry of Land Use and Housing has taken on board because we need to re-locate that family… then we can work further to treat the problem but is still in the planning stage.”

“The situation is being monitored, and we have asked the family to be prepared to move fast if there is a necessity.”