Time to ditch the spare tyre! Business booms for Seychelles gyms in first week of 2015 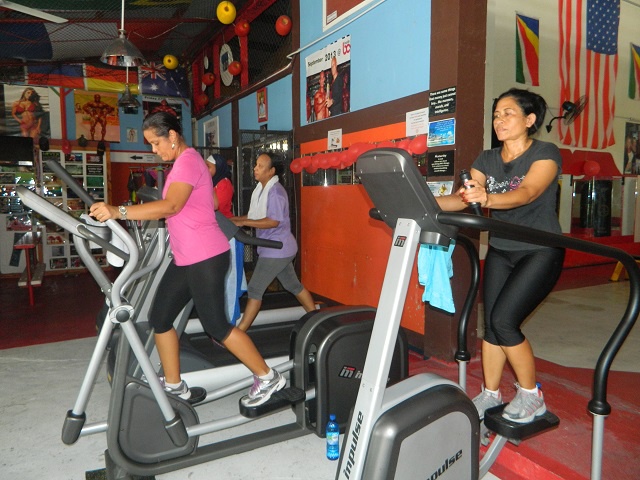 Getting back on the treadmills. A group of women during a work-out session at a gym in Victoria, Seychelles. Such facilities have seen a sudden increase in users as soon as 2015 was merrily welcomed. (Gilly Jean / Seychelles News Agency)

(Seychelles News Agency) - The 2015 New Year public holidays falling into neat conjunction with the weekend meant one thing to the 90,000 inhabitants of the Seychelles islands – an opportunity to have an extra-long party.

The republic of 115 islands in the western Indian Ocean, like many other countries in the world, has a tradition of partying hard over the festive season. But for many Seychellois, the consequences of their favourite season’s merrymaking have finally caught up with them.

“I feel heavy,” says Elton, 39 years old. “I’ve eaten extra during the festive season. Some of the stuff I don’t eat throughout the year but now I have extra fat around my hips. I almost could not get in my office clothes!” Elton also guiltily confesses that he consumed extra alcohol the two weeks prior to Christmas and into the New Year.

Young couple Bertrand and Christianne also spoke wistfully of their vices of the festive season when they talked to SNA.

“We have attended several parties since December. We got real drunk a few times and ate as much as we felt like”.

But now that the festive season has ended, a sense of normality has also returned to the Indian Ocean Island as office and shop workers try to focus on being back in business and children get ready for the start of another school year.

A large segment of the population are now also flocking back to sports facilities and gymnasiums to get themselves back in shape and shed the extra kilos accumulated during that period.

“Usually before Christmas, people start getting into shape to fit into that special dress for the end of year gathering,” says Stella Dubel, a trainer from X-TREME gym, located at Orion Mall in Victoria.

“Close to Christmas, the clients tend to fan out,” explained Stella, “but things pick up as soon as the New Year celebrations end.”

The phenomenon proved itself to be nation-wide after the proprietor of Fitness X-tra gym, based on the second most populated island of Praslin, Cyril Rabat, also confirmed a boost in business as soon as 2014 was out of the door.

“Some people had already budgeted and resolved to come to the gym as of the beginning of the year, but then by February, having sorted out their finances, new members start pouring in.”

Cyril has been running a gym for seven years and says only the ones with the strongest willpower stay in training right through until December.

“A person cannot come to the gym only to get rid of extra fat along the hips or thighs, they have to do the whole body,” says Dubel. “It does not work if someone does exercise for one day or for one week. It’s not even worth their money. They have to continue with a good regime throughout the year.”

Seychelles already has a high incidence of obesity, which affects an estimated 60.1 percent of the population, coupled with typically high consumption of alcohol.

Lack of exercise can lead to several complications including diabetes and cardio-vascular diseases, while a regular workout, according to the World Health Organization, promises a multitude of benefits.

Bodybuilder, trainer and owner of Animal Kingdom gym, located in the capital of Victoria, Regis Delorie, says one has to persevere in order to stay healthy throughout 2015, adding that his establishment provides a tailor-made programme for newcomers which should ideally be followed for an entire year.

“You cannot start something and then stop midway… We start slowly with exercises on treadmills followed by more intense exercises. Out of 50, 20 newcomers might stay, the rest drop out of the programme although they get specialized assistance throughout their subscriptions,” he told SNA.

“Some blame it on their work schedule or finances but I think they should stick to it. If they can’t come to the gym, they should find alternative training facilities to stay in shape,” says Delorie, who is also an ex-Mr Seychelles, a body-building competition held annually in the Indian Ocean Islands.

When contacted by SNA, the head of the nutrition department of the Seychelles Ministry of Health, Therese Vereine-Louis-Marie added that to exercise is a good thing but people also need to be more conscious of what they are eating in order to stay healthy in 2015.

“The theme chosen by the Ministry for 2014 until April 2015 is My Health, My Responsibility. We would therefore like to urge everyone to take their own health into their hands,” says Vereine-Louis-Marie.

“To stay healthy, one not only needs to exercise but exercise throughout the 300 days or so. This along with a  proper balanced diet is the key to staying healthy in 2015.”

Obesity 'epidemic' affects one in 10 worldwide

WHO urges price hikes on sugary drinks in obesity fight