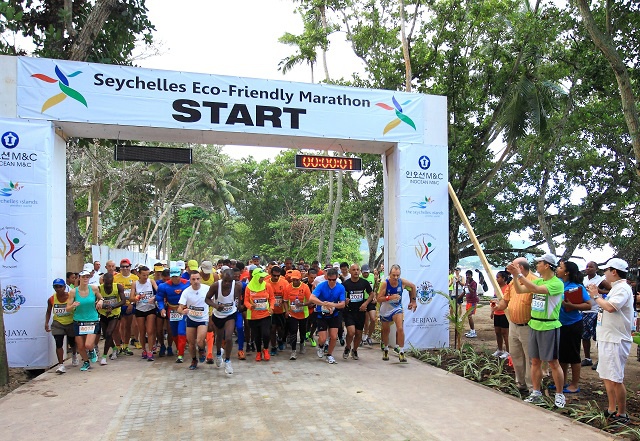 The 2014 Eco-Friendly Marathon in Seychelles attracted almost 2,000 participants and this year plans to target even more. (Ministry of Tourism and Culture)

(Seychelles News Agency) - At 7 am on a typically balmy Sunday morning in the Seychelles’ capital city of Victoria, some might be getting ready for church, making their way down to the beach or even still snuggled up in bed.

However, on Sunday 22 February, tourism authorities expect around three thousand people to be pounding the pavements of the northern districts of the main inhabited island of Mahé.

The reason for this unusual burst of activity will be the archipelago’s 8th annual Eco-Friendly Marathon, aimed at attracting thousands of people, both local and from abroad, who will be walking, jogging and running various distances.

Since the annual event was launched in 2008, it has seen an increase in the number of participants from different countries, notably from Asian countries such as South Korea.

In a press statement issued on Monday, the Seychelles Ministry for Tourism and Culture, the participants will start the race in Beau Vallon, one of the most popular tourism areas in the north of Mahé.

Last year, around two thousand participants registered for the race.

With merely a month to go, the event coordinator, the country’s National Sports Council (NSC) is urging participants to register early.

“This should be your New Year’s resolution or challenge, towards a healthier lifestyle,” stated Giovanna Rousseau, the NSC’s chief executive officer.

According to the press release, rewards for all participants will include medals and a wide range of prizes for both the international and local marathon runners.

The first Seychellois winners in both the male and female category will also get the chance to participate in the Namseungryong Marathon in South Korea later this year.