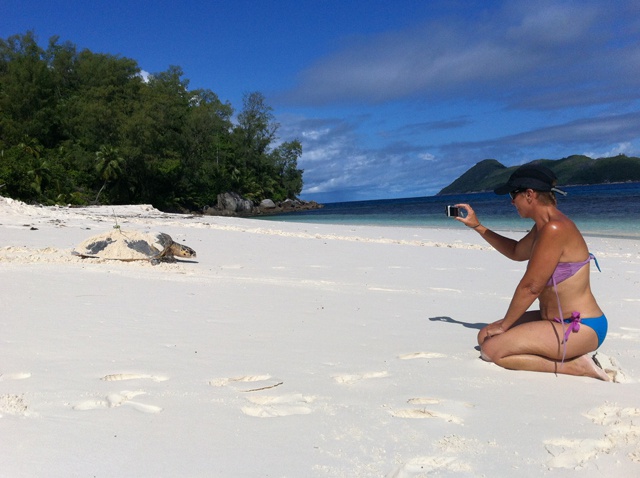 A tourist photographs a mother hawksbill turtle as she heads back to sea after laying her eggs, while keeping a respectful distance. For many, the chance to observe turtles nesting in broad daylight is a once-in-a-lifetime experience. (Hajira Amla, Seychelles News Agency)

(Seychelles News Agency) - While the population of hawksbill turtle around Seychelles’ inner granitic islands has stabilized and possibly even increased, the rate at which green turtles are hatching still remains concerningly low, according to Ministry of Environment officials.

The nesting season for both species of turtle in the 115-island Indian Ocean archipelago is between October and April, coinciding almost exactly with the calm monsoon season when gentle trade winds blow towards the north-west.

Conservation ranger Ashley Pothin told SNA that officers of the Wildlife and Conservation Division of the Ministry of Environment and Energy, conduct routine patrols on all turtle nesting beaches of the main inhabited islands of Mahé, Praslin and La Digue.

On Mahé, more nesting is observed around the southern tip of the island: at Takamaka, Grand Police and Intendance, which are currently all areas with low levels of human activity and tourism development.

Pothin said that rangers usually go to beaches between six and seven in the morning to observe turtles laying their eggs.

“Our presence on the beach also deters poaching,” he said.

He noted that the monitoring is being done regularly every nesting season to collect data. There are indications that the hawksbill turtle population is now stabilizing and possibly increased. We are seeing new turtles which have not been tagged.”

Pothin noted however that while about 500 to 600 hawksbill turtles can be observed in south Mahé, during one nesting season, the number of green turtles rarely exceed a dozen.

Green turtles, although known to travel staggering distances, are not as common in Seychelles as they once were, the majority being found in the south-western coralline islands of the archipelago, especially at the Aldabra Atoll, where they nest the most abundantly.

Green turtles travel huge distances between their feeding sites and nesting sites, with mature turtles often returning to the exact beach from where they hatched. Where beaches are affected by human activity and settlement, female turtles may fail to nest, or if they do succeed, their eggs often become easy prey for both humans and other predators.

Hawksbill turtles were, until the complete ban on their catching or killing in 1994, hugely sought-after for their shell, which was used to make jewellery and other artefacts for sale to tourists, while the green turtle was highly prized for its meat.

Pothin noted that prior to the Wild Animals (Turtles) Protection Regulations being passed into law in 1994, it was only forbidden to catch turtles during the nesting season.

Severe penalties were introduced with the new law, including fines of up to 500,000 Seychelles rupees (just over $35,000) plus the possibility of two years imprisonment and the seizure of boats and other marine equipment.

These strict measures, has brought poaching to a minimal level according to Pothin. During most years, only three or four instances of poaching are recorded. This usually results in police action and prosecution of the suspected poachers.

There are also a few instances when rangers only come across the carapace or shell – a grim indication that the poachers managed to get away.

Pothin believes that at the moment it is climate change and human activity that are mostly to blame for declining green turtle populations.

He added that noise in the water, for example from boat and ship engines, also cause turtles to keep away.

Pothin believes that while poaching has been brought under control, the destruction of habitats, caused by increased human activities on traditional turtle nesting beaches remain the biggest threats to the turtle population in Seychelles.

Species » Be a reporter: Write and send your article » Subscribe for news alert
Tags: turtles, poaching, Ministry of Environment, conservation