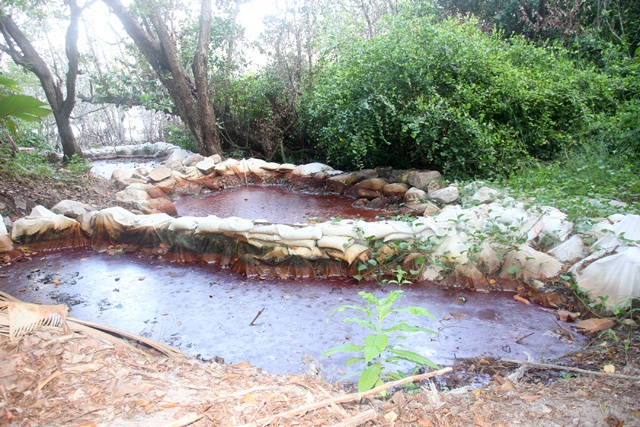 Ponds of several meters deep were dug in the polluted area near Baie Pasquiere on Praslin island in order to allow the substance to seep out of the area through a stream. The Seychelles Ministry of Environment, Energy and Climate Change has said the pollution is now under control. (Seychelles News Agency)

(Seychelles News Agency) - Works are expected to start soon on the rehabilitation of an area of mangrove near Baie Pasquiere that was polluted with diesel fuel on Praslin island, according to the Seychelles environment authorities.

The Director of the Wildlife, Enforcement and Permit Division in the Ministry of Environment, Energy and Climate Change, Flavien Joubert visited the site recently with other officials of the ministry. He says the pollution is now "under control" and only a minimum of the polluted substance was visible in the ponds.

“The amount of fuel seeping out from the soil is zero...but the ponds are still there and we can still see traces of fuel but not enough to be pumped out. It is very minimal. This is what we were expecting,” said Joubert in an interview with SNA.

As regards to the fuel that has been pumped out since June, Joubert said these will be transported to the main Seychelles island of Mahé and disposed of in the incineration facilities. The exact quantity of fuel and the surface area that has been affected is still unknown.

Now that the situation seems to be under control the site which had been closed to the public using a wooden fence is expected to be rehabilitated with mangroves and other coastal vegetation.

The Terrestrial Restoration Action Society of Seychelles (TRASS), a local NGO actively involved in the rehabilitation of forests and wetlands, will be coordinating the rehabilitation efforts along with the financial support of Raffles Praslin resort.

The area affected has no other buildings or developments in its vicinity other than the electricity generators belonging to the Raffles Praslin, which is found round the corner at Anse Takamaka.

The environment ministry believes that the waste oil was discharged into the soil on higher ground about 15 metres from the hotel’s generators and as a result of heavy rainfall in early 2014, the soil became saturated and the waste oil seeped into the ground through underground river streams, and flowed downhill onto the coastal area.

According to Joubert, the investigation is still ongoing to establish all the facts relating to that matter.

The luxurious five-star resort, owned by Saudi billionaire Prince Alwaleed bin Talal, the 34th richest man in the world according to Forbes magazine, is helping to fund the rehabilitation exercise, although the resort has not commented on the cause of the incident as its conducting its own investigation.

SNA has learnt that Raffles Praslin through its owners, the Kingdom Hotel Investments, also commissioned their own tests to be done in South Africa to identify the substance and its source.

Contacted by SNA about the results of the said investigation and to comment on the project to rehabilitate the polluted area, the General Manager of Raffles Praslin resort, Christoph Ganster said “the matter remains under investigation by an independent consultant commissioned by hotel ownership, and will complement the existing investigation from the Ministry of Environment.”

“As such, the resort is unable to comment on the initial source of the leak until a full assessment and review of the situation is complete,” said Ganster in an email.

The pollution was first reported to the environment authorities on 30th March 2014 by people who live on the island as the brownish substance was identified through a pungent smell of what many thought to be ‘fuel’ and they noticed the remarkable disintegration of the mangroves on the shore of  Baie Pasquiere, in the north-eastern side of Praslin.

The polluted area is a private property belonging to the family of a naturalized Seychellois of Indian origin, the multimillionaire Chinnakannan Sivasankaran, better known in Seychelles as 'Siva,' who recently applied to the island nation’s Supreme Court for bankruptcy protection.

In an interview with the national television, the Seychelles Broadcasting Corporation, in July last year, Joubert said over twenty samples had been collected in order to identify the substance responsible for the contamination.

According to Joubert, tests carried out by the Seychelles Bureau of standards (SBS) revealed that the substance had a high concentration of diesel.

As part of efforts to remedy the situation, ponds of several meters deep were dug in order to allow the polluted substance to seep out of the area through a stream.

What does the law say?

Meanwhile, the ministry of environment has confirmed that as this is a serious pollution incident, the matter has been addressed to the Attorney General’s office which will decide based on the evidence at hand what would be the course of action concerning liability for damages caused to the environment and to individual properties.

According to Seychelles law, under the Environmental Protection Act (1994), this kind of pollution is classed as an offence of soil pollution with hazardous substance or waste under Section 7 (4) (a) of the EPA.

Most cases of pollution of this kind in Seychelles are however settled out of court.